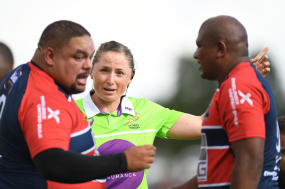 It was a long journey - 32 hours from Cape Town - and her luggage took even longer.

Aimee arrived one day before the Independence Day celebrations of 4 July and two days before earthquakes shook Southern California, an area notorious for earthquakes.

San Diego had had 11 earthquakes in a week, 24 in the last month and 206 in the last year! This latest killed nobody but shook people up.

On Saturday, the World Champion Black Ferns of New Zealand brought an earthquake of their own earthquake when they beat the Women's Eagles 33-0 at the Chula Vista Elite Athlete Training Center in San Diego, a match in the second round of the Women's Super Series.

Aimee was an assistant referee to Joy Neville, the former Irish captain who played in two Women's Rugby World Cups, and not only refereed in the 2017 World Cup but also refereed the final.

Aimee will referee two matches in the Women's Super Rugby Series - England vs France at the Chula Vista Elite Athletes Training Center on 10 July 2019 and France vs USA at Torero Stadium also in San Diego in 14 July 2019.

A month later she is in New Zealand for the match between New Zealand and Australia at Eden Park in Auckland.