Aimee in Sunshine and Storm 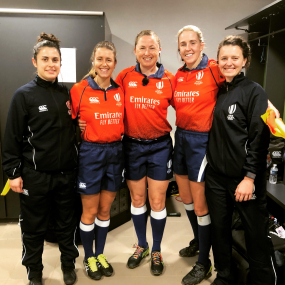 Aimee Barrett-Theron, South Africa's top woman referee, has just been to Europe to referee in the first two rounds of the Women's Six Nations.

She tells us her experience in two of the competitions top matches - in sunny France and stormy Dublin.

She went to Pau, a university town southeast of Paris near the Pyrenees, for the first match between England and France. Then she crossed to Dublin where Ireland, second on the log after Round 1, were playing Wales. These are top teams in women's rugby.

Aimee writes on her "amazing trip up to Europe for the Women’s 6 Nations".

We started the week off at a World Rugby camp where we all met to discuss the tournament and align ourselves to the World Rugby guidelines. It’s also great to connect as a team before we head out to referee.

My first match was France vs England in Pau, France and it was an absolutely titanic battle. The weather was incredible at this time of the year - the scoreboard even read 27 degrees at a stage. It was amazing to referee in front of a crowd of about 15 000 people who are very passionate about their rugby.

Both teams went all out and it was England who took it at the end 19-14.

I then moved over to Dublin to referee Ireland vs Wales in the coldest conditions I’ve ever refereed in. The first half was the picture of sunshine but things turned really grim very quickly as the rain/sleet cams down hard and fast. The score doesn’t do the teams justice as both teams really had a good go with ball in hand. Ireland won

The standard of the Women’s Six Nations was absolutely incredible and it was a privilege for me to be in the ‘best seat in the house’. I can’t wait to see what happens for the rest of the tournament!