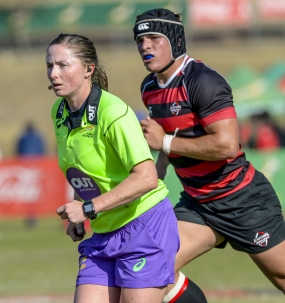 Amelia Earhart did with her flying, what Aimee Barrett-Theron is doing with refereeing.

Aimee Barrett-Theron is making that little bit of history - not to international acclaim as Amelia Earhart's flying feats did for her, but still a long way from the all-male cast of referees of the past.

She becomes the first woman to referee Currie Cup rugby when she referees the Division 1 match between South Western Districts and the Leopards in George on Friday, and nobody is surprised at her appointment.

A former international three-quarter, making her debut when still Under-20, Aimee is remarkably fit and fast. The SA Referees' Association measures her speed and fitness on the same scale as that of their top male referees.

She has a good knowledge of law, a good feel for the game and good communication skills. She is the first woman to make the national refereeing panels in South Africa and is currently on the Premier Panel, one of the nine very best referees in South Africa

Aimee is no stranger to men's rugby, having refereed in the Under 20 and Under-19 Championships, Varsity rugby, two Craven Weeks and just recumbently the Under-18 match between England and France.

She has wide experience of refereeing around the world and has recently decided to concentrate on 15s rather than Sevens. Ben Crouse has done the same. They both have enjoyed Sevens but find that it takes them out of the country a good deal.

She says of Friday evening's match in George: "I'm really looking forward to it."