Atack and the Whistle 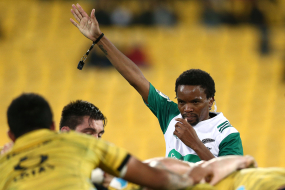 The whistle is still the referee's major piece of equipment, and yet it is one we take for granted, even though it has not always been around.

There are people who believe that it came to refereeing from the police and from time to time a referee is accused of being a policeman - "blowing that damned whistle and killing the game".

The refereeing use of a whistle more to do with sheep than policemen.

New Zealand is sheep country. Dogs are used to control the sheep and the dogs are in turn controlled by the shepherd's whistle. It is not surprising, therefore, that the referee's whistle was developed in New Zealand. The man who first used it on a rugby field was William Atack of Canterbury.

William Harrington Atack, born in England in 1857, went out to New Zealand with his parents when he was only two. The travelled on board the HMS Cornwall, a long (over three months) voyage during which his older sister died. The Atacks arrived in Lyttelton from Southampton on 12 September 1859. Father William Atack was a painter.

Young William was a good scholar at Christ's College, Christchurch, played and cricket for Canterbury, won a scholarship to university but preferred to become a journalist, moved to Wellington in 1886 and was the general manager of the board of the New Zealand Press Association for 44 years and died on 16 September 1945. In 1884 he used his dog whistle to referee a match. In 1892 the IRB made the use of a whistle compulsory.

Those were the days when the only weapon the referee had was his voice. If he needed to stop the game, he had to raise his voice above the noise of spectators off the field and the raised voices on the field in days when players would appeal like cricketers if they thought something wrong. Atack found it tiresome.

New Zealand is sheep country. Dogs are used to control the sheep and the dogs are in turn controlled by the shepherd's whistle. It is not surprising, therefore, that the referee's whistle was developed in New Zealand. Atack was the man. He felt a sheepdog's whistle in his pocket and before a match asked if he could use it. They agreed and the idea caught on.

About the same time Joseph Hudson developed the first modern whistle in Birmingham, pea and all, for use by the police. His whistle, adapted, is still popular amongst referees - the Acme Thunderer which is used by millions.

In 1885 a circular from England's Rugby Football Union laid down: In any match each umpire must carry a stick and the referee must be provided with a whistle.

In 1892, the International Rugby Board decreed: The Referee must carry a whistle. And it gave 10 cases in which the referee should blow the whistle.

In 2020,  Law 6.8 says: The referee carries a whistle. And it gives eight occasions when a referee must blow his whistle.

The use of the whistle is interesting for there are many ways in which it can be blown - from a minatory blast to stop foul play to a shy peep for an obvious line-out. It was said many years ago that a blind man watching a match should be able to work out a referee's decision from the tone of his whistle. Think of the many differing tones - the first kick-off, a try, a penalty, a scrum, stopping play because of a serious injury, when play goes on because players have not heard the whistle. There used to be a peep-peep-peep-peep on some whistles but the annoying habit has - mercifully - gone.

But the next time the whistle blows, think of William Atack and his sheep whistle and Joseph Hudson and his police whistle - not that a referee is dealing with sheep or crooks!