Barrett-Theron off to the USA 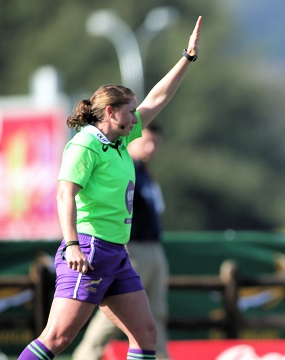 South Africa’s leading female referee, Aimee Barrett-Theron, will travel to the USA in November where she will be involved in two Internationals between the USA and Canada as part of the World Rugby referees panel.

Her first assignment will be as an assistant referee in the Test between the USA and Canada at Chula Vista in San Diego on Wednesday, 20 November, while she will take charge of the next match between the sides at the same venue four days later on Sunday, 24 November.

These appointments follow a number of other appointments on the international stage this year, which saw Barrett-Theron serving as an assistant referee in the Springbok Women’s recent Tests against Spain and Scotland, and officiating a handful of matches in the June/July international window.

This included taking charge of matches between England and France, France and the USA – also in San Diego – and the match between New Zealand and Australia in Auckland. She also served as an assistant referee in the clash between France and New Zealand in the USA in July.

“We would like to congratulate Aimee for again earning her place on the referee panel for the November Internationals, and we wish he luck for her matches in the USA,” said SA Rugby CEO Jurie Roux.

“Referees have to perform at a very high standard consistently to feature at this level year-in and year-out, and this is a testament to the hard work and effort Aimee has put in to remain at this level for the last few seasons.

“Her work ethic is certainly an inspiration for the aspiring young female referees coming through the ranks.”