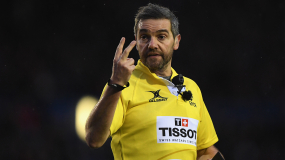 The referee appointments for the Heineken Champions Cup and Challenge Cup quarter-final matches have been announced following a selection committee meeting chaired by EPCR’s Head of Match Officials, Joel Jutge.

Clubs with as many as 24 European titles between them remain in contention going into the knockout stages, and France’s Pascal Gauzère will be in charge when the Heineken Champions Cup resumes with the heavyweight clash of No 1-ranked, Leinster and holders Saracens, on Saturday, 19 September at the Aviva Stadium.

Later the same day, Romain Poite, also of France, will be in the middle for the showdown at Stade Marcel-Michelin between ASM Clermont Auvergne and Racing 92.

Then on Sunday, 20 September, England’s Wayne Barnes will take charge of the head-to-head between four-time champions Toulouse and Ulster at Le Stadium, followed at Sandy Park by the meeting of in-form Exeter Chiefs and Northampton Saints which will be refereed by Matthew Carley of England.

The Challenge Cup last-eight matches get underway on Friday, 18 September with the clash of Bristol Bears and the Dragons at Ashton Gate where France’s Mathieu Raynal will be on the whistle, and on the following day, Ireland’s Frank Murphy will be in the middle for the Stade Chaban-Delmas meeting of Bordeaux-Bègles and Edinburgh Rugby, while his compatriot, Andrew Brace, has been appointed for the RC Toulon-Scarlets tie at Stade Félix Mayol.

The concluding Challenge Cup quarter-final on Sunday, 20 September which pits Leicester Tigers against Castres Olympique at Welford Road will be refereed by Mike Adamson of Scotland.

All Assistant Referees and TMOs for the eight quarter-finals are from the unions of countries in which the matches are being played and all match official appointments are consistent with the advice of EPCR’s Medical Advisory Group which includes the Chief Medical Officers of the six unions as well as the medical leads from Gallagher Premiership Rugby, the Guinness PRO14 and the LNR.