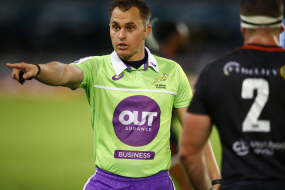 Marius van der Westhuizen of Western Province has been appointed to referee the final of the 2019 Currie Cup.

That is according to Die Burger of Monday, 2 September 2019 in which a little sentence at the end of an article states: "Marius van der Westhuizen is die skeidsregter vir die eindstryd Saterdag."

In 1939 there was the first final and there were another six finals before 1968, since when there has been a final e very year.

It has been a huge honour for a referee to be appointed to referee the final. The great Boy Louw refereed the 1939 final and in all 27 referees have refereed Currie Cup finals. Marius van der Westhuizen is just the 28th referee so appointed.

Van der Westhuizen's interest in rugby started as a stats collector for Andy Louwrens and after that in doing analytical work for Peter Schnetler, who will be taking his system to the Rugby World Cup in Japan this year. Attending referees camps inspired Van der Westhuizen to start refereeing himself and, in 2007, at the age of 23, he joined the Western Province Referees' Society.

In 2009 he first appeared in a South African referees' panel and went to Craven Week. In 2011 he started refereeing senior provincial matches in South Africa, and from then on his career blossomed.

Internationally, his profile was heightened thorough his performances on the international Sevens circuit , refereeing the final of the Hong Kong Sevens in just his third tournament. That was in 2013 - a very good year for him.

Referees in Finals by Number

Most Finals Refereed by Province