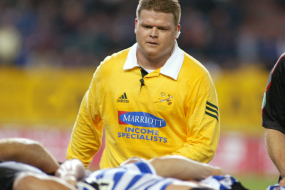 Michael Katzenellenbogen, a former Currie Cup and Test referee, has died in his sleep. He was 50 years of age.

Michael was the son of Deon Katzenellenbogen, a prominent referee in the Western Province in the 1960s and 1970s, who is living in the Strand. Amongst many other top matches his father refereed a match involving the great 1974 Lions.

Michael was educated at Lochnerhoif Primary in the Strand, Strand High and Paarl Boys' High before going on to at Stellenbosch University where he qualified as a physiotherapist. His first job with the great Springbok Theuns Stofberg before going off to Bloemfontein. He later moved to Pietermaritzburg where he had a practice.

He ended his career on the A Panel of South African referees in 2004, at a time when South Africa had many top referees - Jonathan Kaplan, André Watson, Tappe Henning, Mark Lawrence, Andy Turner, Marius Jonker, Shaun Veldsman and the up-and-coming Craig Joubert, under the tutelage of Freek Burger.

Katzenellenbogen refereed two Tests - Namibia vs Madagascar in 2002 and Uganda vs Zimbabwe in 2003.

In 2017 he was diagnosed with cerebral ataxia. He was later confined to a wheelchair and unable to speak.

Michael Labe Katzenellenbogen was born in Cape Town on 22 December 1968 and died in Pietermaritzburg on the night of 27-28 July 2019, survived by his wife Linda and seven children.