Glen Jackson to Whistle his Last 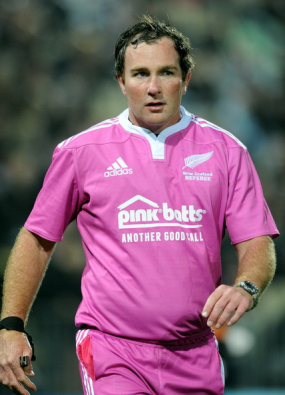 News from New Zealand arrived today - sad news - that Glen Jackson has decided to retire from professional refereeing in March 2020. It brings to end a career of 25 years in which he has played an outstanding role in top rugby, as player in New Zealand and England, and, for the past 10 years as one of the world's top referees.

It seems that he may well not be lost to rugby as it is possible that he will develop his coaching involvement with Bay of Plenty, his home province.

His decision to retire is not altogether surprising following his shock omission from the 2019 Rugby World Cup in Japan. Twelve other referees were chosen, including two New Zealanders and four Frenchmen. The selection of Nigel Owens, Jaco Peyper and Wayne Barnes were readily understandable but it was hard to see how the other nine were superior enough to Jackson for him to be excluded. For one thing Jackson had not been guilty of anything like the gross errors of Angus Gardner and Romain Poite in recent times.

Jackson has been a great ambassador for refereeing - the former top player who became a top referee and such a presentable side of refereeing. Among his honours were the 2007 Golden Boot Award for scoring most points in the English Premiership and five awards as New Zealand's Referee of the year.

As a player Jackson was an outstanding first five-eighth (New Zealand for flyhalf), playing for Bay of Plenty, the Chiefs in Super Rugby and the Maori All Blacks before going off to the Saracens in England. He played 60 times for the Chiefs in Super Rugby and 159 times for Saracens in the English Premiership, In 2009 he played twice for the Barbarians.

Jackson was the first New Zealand to play and then referee over 100 First Class matches.

Jackson's refereeing was characterised by his instinctive understanding of the game, excellent rapport with players, coaches and the public, his speed about the field and his calmness.

The five-man selection committee for the World Cup had three from the North and two from the South. Apparently northerners queried his ability to referee scrums and mauls - as if anybody else always gets it right.

Lawrence said: “Glen changed the shape of refereeing in our country when he became the first top class player to become a professional referee through the player scholarship system. Glen brought rugby nous to refereeing, strong relationships with players and coaches both domestically and internationally, and he added so much to our referee team culture by being a great team man.

“Glen has had a fantastic career in rugby, after 25 years at the top level it is time for his wife Fiona and children Payton and Ella to have more time together and I thank his family for their amazing support which has allowed Glen to travel internationally and referee on the biggest stages."

Rugby refereeing will be the poorer for Glen Warwick Jackson's retirement.