In Memory of a legend – Uncle Paul Dobson 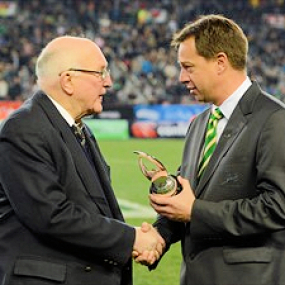 By the SARRA Executive

Uncle Paul, a mild-mannered gentleman, world-acclaimed writer, a ‘Walking encyclopedia’ on the history of rugby and a man with profound knowledge of the laws of the game, passed away on Monday, 20 July 2020.

It is very seldom that a man becomes a legend within his lifetime. Uncle Paul was such a person. He achieved great milestones during his life. His influence can be clearly seen in the people who were fortunate to meet Uncle Paul, to work with him or to be involved with him in one or other form. It’s true what Jan de Koning from Rugby365, wrote: “No eulogy can truly do justice to this man who has been such an inspiration to us”.

Uncle Paul was legendary in international rugby circles for his service to refereeing and for his eloquence as an author. His global connections were staggering. He could phone or email just about anyone for comment on a refereeing matter. He wrote several books on the game. Examples of his writing include “The Official History of South African Rugby, Doc: An Autobiography of Danie Craven”, and biographies on Nick Mallett and Andre Watson.

He was a world authority on the laws of the game and was always willing to share his knowledge. He served the game for five decades and never failed a law exam during those 50 years. He was never too rushed for an interview and was passionate about providing clarity on law applications, irrespective of whether the referee’s decision was correct or not. He spoke with authority, himself having been a referee since 1955. His refereeing career included more than 40 first class matches.

Uncle Paul was also a school rugby coach while serving as master at Diocesan College in Rondebosch where he taught Latin. He was a mentor to several referees, junior and senior, among them being Andre Watson, still the only person to referee two consecutive Rugby World Cup Finals.

Uncle Paul joined the Western Province Rugby Referees’ Society in 1968 and was their Chairperson from 1985 to 1999. He was a recipient of the World Rugby Referee Award for Distinguished Service at the World Rugby Junior World Championships in Cape Town in 2012. He actively participated in the process of unity in rugby in South Africa. One of his major achievements was to unite seven different referees’ societies into one united Western Province Referees’ Society. He also served the South African Rugby Referees’ Association as an executive member between 1991 and 1995 and assisted in achieving unity on that platform. He remained active in refereeing as editor of the phenomenally successful SA Referees’ website.

Uncle Paul, you will surely be missed, but never forgotten.