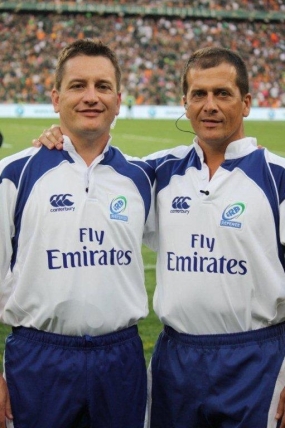 The IRB has now made known a protocol for the two match officials on the side of the field who monitor the coming and going of players during a match - substitutions, replacements, blood injuries, concussion examinations and yellow and red cards. It includes the duties of the match-day doctor and the time keeper, and their interaction with the sideline officials.

The protocol represents a job description and will doubtless help is situations such as the one that occurred with the confusion that led to the substitution/replacement controversy in Pretoria recently.

It would have been good if this had been available before the Pretoria Test - before the horse had bolted, as it were.

NB 4 & 5 are the numbers allotted to these officials as the referee is 1 and his assistants 2 and 3. In the Test at Soweto recently the 4 and 5 were the brothers Marius and Tiaan Jonker.

1. No.4 & No.5 Officials: Two referees appointed to assist the referee and the teams on the change of players from the reserve bench onto the field.

2. Notational Analyst (No.6 Official): An individual appointed as match statistician to capture all the relevant information of the change of players during the match. This individual will be responsible to ensure that all substitutions/replacements in the match are legitimate according to the provisions of Law 3 and IRB Regulations.

3. Match Day Doctor: A medical doctor appointed to verify blood injuries and assist the referee on players with possible concussion as per IRB Laws & Regulations.

4. Timekeeper: An individual appointed to keep time and record all relevant information to stoppages, temporary suspensions, blood injuries and pitch side concussion assessment (PSCA) during the match.

5. All replacements and substitutions of a team must be channelled through the No.4 & 5 officials.

6. The team manager must supply the official with a substitution/replacement card indicating the following:

a. Player’s number being substituted or replaced.

b. Player’s number going onto the field.

7. Tactical substitutions: The official will after receiving the substitution form from the team management verify if the proposed sub is within law, and then notify the referee of the change.

8. Substitutions may enter the playing area once the substituted player is making his way off the field.

9. Injury & PSCA replacements: Must be processed as priority without delay to ensure 15 against 15 at all times on the field. Legitimacy of the replacement must be determined immediately with the paper work to follow after the replacement was made.

10. Blood substitutions: Will only be allowed onto the playing area once the blood injury has been confirmed by the match doctor.

11. Players returning from the blood bin needs to be cleared by the match doctor before being allowed back onto the playing area.

12. Please note the applicable time allowances for the following:

a. Blood injury time: 15 minutes running time. Time starts when the player leaves the playing area. The player must be ready to play next to the playing field before the 15 minutes expires.

b. PSCA time: 5 minutes running time. Time starts when the player leaves the playing area. The player must be ready to play next to the playing field before the 5 minutes expires.

c. Temporarily Suspension (Yellow Card) time: 10 minutes playing time. Time starts when play resumes after a player was shown a yellow card. The player is allowed warming up time 2 minutes before the player is due to return to the match.

d. Players joining the match: During all the above mentioned changes the players may enter the playing area only at a stoppage in play with the permission of the referee.

13. The 4 & 5 officials must give the completed substitution/replacement card to the match statistician who will record the substitution or replacement on the movement of players document with the relevant time also noted.

14. A copy of The Movement of Player document, as kept by the match statistician, with attached all the relevant substitution or replacement cards, as completed by the two team managers, must be handed to the Match Commissioner for any future references.

15. A copy of The Movement of Player document must be forwarded to SA Rugby as soon as possible after the match.

16. During the game the match doctor must be available in the playing enclosure at all times to both team managers to verify blood substitutions or verify any other injuries as required by the referee.

17. The match statistician will note temporary suspensions with the relevant times as well as sent-off offences with relevant time in the game. These needs to be reflected accurately on the movement of players document.

18. It is advised to inform managers of teams of the process before the game and request their understanding and co- operation when substitutions or replacements are being made.

19. The showing of numbers to inform spectators should be done after the change has been made and must not delay the process.

20. Sideline officials must not be distracted in their duties by any misbehaviour or incidents during the match. A professional approach must be maintained at all times.

21. Sideline officials must at all times be courteous and helpful to teams to assist in this process.

22. Any incidents that requires attention needs to be reported to the Match Commissioner through a written report after the match.