Jason for the Final 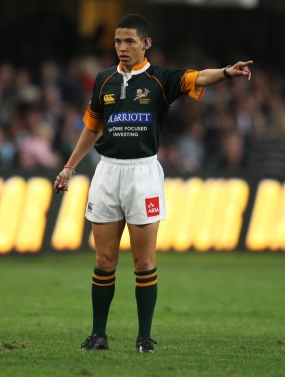 Jason Jaftha has been appointed to referee the Final of the First Division of the Currie Cup - Eastern Province Kings vs Pumas.

They are two sides who have played each other twice and on each occasion the result has been a draw. It could be exciting. For Jaftha the appointment is exciting.

Back from work on Monday evening in his father's shop (Gameshop) in Prince Albert, he opened the e-mail with his appointments and saw that he had been appointed to do the Final. "I was surprised - didn't expect it at all. In fact I was overwhelmed with a mixture of emotions, for I realised what an honour and a privilege it is to be doing my first Final in the First Division."

It is not a surprise appointment, following as it does on three excellent Premier Division matches - Blue Bulls vs the Golden Lions in Pretoria, Golden Lions vs Sharks in Johannesburg and Free State Cheetahs vs Griquas in Bloemfontein. André Watson says: "Jason's appointment to the Final is well deserved as he has been in great form of late."

Nor is it a sudden appointment.

Like Craig Joubert, Steve Walsh and Wayne Barnes, Jaftha started refereeing as a schoolboy, just 15 years of age. "I grew up in a rugby family and since referees did not always show up in Prince Albert I was always the one who refereed the games. It became my way of staying involved with the game."

Prince Albert? A beautiful town over the Outeniqua Pass into the Karroo, on the way to Oudtshoorn. At the foot of the Swartberg, well watered by the Swartberg, it is a delightful place becoming increasingly fashionable. It's a small place and there, now that Outa Lappies Schoeman has died, Jason Jaftha is a hero, its best known inhabitant.

Jason Jamaine Jason was born there (4 May 1985) and at Hoërskool Zwartberg when he started refereeing. He became the head prefect of the school. Now he has been declared an ambassador for Prince Albert, the first town in South Africa to establish a racially mixed rugby team. That was back in 1984 after a visit by Doc Craven, Ian Kirkpatrick and their team.

In 2004 he joined the South Western Districts Referees' Society. Not long afterwards, Jimmy Smith-Belton, a top referee in his day phoned and said: "I have just seen a schoolboy refereeing a provincial match and he's really, really good."

Jaftha was no longer a schoolboy but he was "really, really good" and his progress up the ranks has been unusually rapid - Contenders Squad in 2006, Provincial Panel in 2007 and 2008, and National Panel from 2009 till now when he is a reserve to the Super Rugby Panel. In 2010 he received the SARU award for the Most Promising Referee.

Now, aged only 27, he is refereeing his first big Final in South Africa, in posh Nelson Mandela Bay Stadium in Port Elizabeth. He is grateful to the Sevens: "Sevens helped me a great deal. I grew more on the Sevens circuit as a referee - on the field and off the field.

"I'd have loved to have stayed involved in the shortened code of rugby. Hopefully I can make a comeback there but for now I'm looking forward to the Final and to work hard to make a success of it."