Jonker - A TMO at the Top 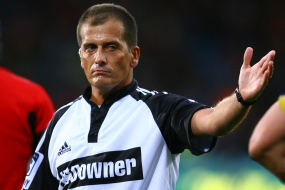 Marius Jonker is a well-known citizen of Richards Bay, a harbour town up on Northern KZN coast, just under 180 km from Durban. It is above all officiating at rugby matches that has made Jonker well-known.

He played his rugby (at flyhalf) in that part of the world - for Empangeni and then neighbouring Richards Bay where Jonker lives with his family and works for Bell Equipment, whose security manager he is after his initial career in the police force.

Jonker was 31 when he started refereeing a career in which he reached the top. His journey to the top from starting in 2000 was a quick one - Craven Week in 2000, the IRB's Under-19 championship in 2004, Currie Cup, Super Rugby and a World Cup qualifier in Kampala in 2005 and then bursting up to the Pacific Nations Cup, Fiji vs Italy in Suva and Ireland vs Australia in Dublin. When he blew the final whistle at Lansdowne Road that afternoon, it ended rugby in the old stadium before the Aviva Stadium grew out of it. At the end of 2014 he retired as an active referee, full of honours and great memories.

Refereeing over, Jonker has become a TMO - a top TMO who was appointed to the semifinal and third place play-off at the Rugby World Cup in Japan when South Africa's participation in the semifinal and final made Jonker ineligible for those matches.

We asked Jonker about being a TMO - a television match official, to give the functionary one of rugby's longest titles. It's a function relatively new to rugby - starting in fact in Pretoria in 1985, an idea cribbed from gridiron where it was first used in 1985.

World Rugby's TMO Protocol makes it clear that the TMO is there to help the referee who remains the sole judge of fact and law. At the top of the TMO tree, Jonker was the TMO in three Six Nations matches recently played - France vs Ireland, England vs Ireland and England vs Wales. Then the virus kept him at home and work in Richards Bay.

1. Why/how/when did you become a TMO?

MJ: After retiring from active refereeing I initially wanted to cut all ties from rugby refereeing. With my son, Rynhardt, playing a bit of rugby**, I found myself next to the field more often than not and it was a matter of weeks and I was back on the field doing club games on Friday nights and sometimes up to two or three school games on Saturdays. I missed the excitement, anticipation and hype of the big arena though. Then Mark Lawrence*** chatted to me and asked me to become a TMO. Although rugby is fun and enjoyment I was never going to do it just for that - if I was to become a TMO, I wanted to do it to seriously and to compete with the best in the world. I also wanted to contribute in the best possible way to making the refereeing team the best they could be on a particular day.

Glad I made the right decision.

**in 2018, Rynhardt, a flyhalf like his father, played SA Schools and this year was in the group for the now-cancelled World Ruyby Under-20 Championship in Italy in June.

2. What was your first match as a TMO?

MJ: I am not to strong on stats but I seem to think it was a Currie Cup game in Bloemfontein, Cheetahs vs Bulls. Nerve-racking!

3. How many matches have you now done? How many Tests?

MJ: Not to sure of the total number of games. 42 tests.

4. How have you changed/grown with the job?

MJ: Most people have the picture of a TMO arriving just before kick off, taking a seat in front of the tv screen, sipping on tea/coffee and eating sandwiches during the game and then geting called into action if needed. So Not True.

When I started as a TMO, I wanted to referee the game from my seat. I soon realized that my best contribution is the one that serves game on the day the best. Sometimes some games deserve a different approach.

I also spent a massive amount of time studying and getting to know my refereeing team's personalities leading into a game. I have had the privilege of getting quite a view games with superstars like Jaco Peyper, Wayne Barnes, Nigel Owens and Jeroem Garces - and it becomes easier when you get the same referee more often. There are some really exciting, less experienced referees, who have recently hit the scene. So my learning never stops.

It is a matter of getting a balance of what to check in a game and what not to check.

Sometimes the best call you make as a TMO is the one you do NOT make.

You have to know your referee and be in synq with him to get that right.
My clients are the referees and the game at hand. If I can keep them happy I am satisfied.

5. Tell us about the World Cup.

MJ: The World Cup was everything I expected and MORE!

I am often asked about my highlight…..and the Boks winning it was obviously massive. Jaco Peyper and I were sitting amongst the players’ families and when Kolbe scored the celebrations had no boundaries. Peyps and I had the privilege to meet with the Boks and their management during the tournament, and the way Rassie and his team went about making Champions was special.

Being selected to do a quarterfinal, a semifinal and 3rd-place play off was also a blessing.
My fondest memory however was the way the refereeing team stuck together and looked out for one another. There was quite a bit of pressure on us during the 1st week in regards to foul play and emails were all over the place. There was also the unfortunate elbow incident which got Peyps into the limelight. The way these referees gathered around Peyps during what was an extremely emotional time for both him and myself as South Africans, was truly remarkable.

I have been on the scene quite some time now and this was the strongest group of referees ever.
I place a huge amount of value on friendship and looking after your friends. These referees were honest examples of true friendship.

6. Tell us about the Six Nations?
How many Six Nations matches did you referee? have you TMOed?

MJ: I might take a bit of flack here but Six Nations, in my opinion, is the best international competition in the world.

The amount of effort and history in these games is remarkable.

I have no idea on my figures here but I have enjoyed every minute.

7. How much are you away from home? Are there family tensions?

MJ: Apart from rugby I am employed by Bell Equipment International. They are the best and have supported me so well. I do travel quite a bit for them as well as rugby so it is fair to say that I am away from home extensively.

It has however been part of the Jonkers for so long that we manage it really well.

8. How much do you see your son play?

MJ: try and get to his games as much as possible and I just love the way he has grown as a player. He is currently contracted to the Sharks in Durban and there is a really healthy competitive vibe amongst all the players at all levels. The boy can play…..and he is much better than his Dad ever was.