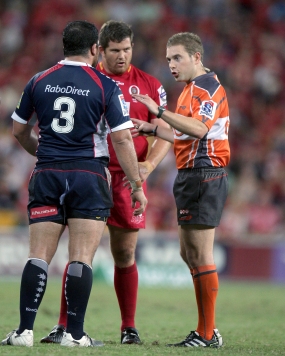 Angus Gardner is a young (not yet 30) referee who started refereeing in 1999, when he was 15, and has made wonderful strides recently which include his first Test and his first Super Rugby Match. Now he is a referee at the Junior World Championship. His feet are on the ladder.

As is often the case, injury forced Angus to take up refereeing "for rehab purposes and part of that was getting back out onto the field and running around again" when he was at Shore, the North Sydney Great Public School. Rehab has become a career.

In 2011 Angus, called Gus by his mates, refereed his first Test - Papua New Guinea vs Vanuatu in Port Moresby, an Oceania Cup match. He has also refereed matches involving Tonga and Canada, provincial matches in New Zealand and top club matches in Sydney. Then he says with excitement: "This year I made my Super Rugby debut Reds vs Rebels in Round 3, an amazing experience."

This is his first Junior World Championship match. He says of it: "It's a fantastic tournament to be involved with both on and off the field. The ability to be in such a positive learning environment and the knowledge, resources and experience available to you are top class."

When he speaks of his highlights, he mentions that Super Rugby debut in Suncorp Stadium, Brisbane.

Of course, he had help along the way. St Dickinson was his role model as he made his way through the ranks. "Lately we have been very lucky in Australia to now have Steve Walsh as a big part of our refereeing group. To draw on his knowledge and experiences has been invaluable and he has acted as a mentor to me since coming over. I am looking forward to travelling over to Port Elizabeth to watch him the third South Africa vs England Test."

"My referee coaches back home Andrew Cole and John McCarthy have also be instrumental in getting me to this point and I wouldn't be where I am without them."

What he likes about refereeing: "The experiences and places you have and visit along the way and most of all the people you form friendships with along the journey."

Angus Ross Gardner, a property developer, was born in Sydney on 24 August 1984. In November last year he refereed his first Test. A month later he was married to Nicole.