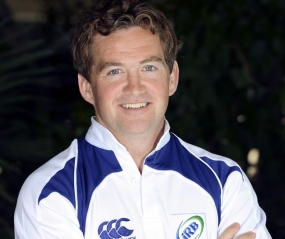 In September 1979 His Holiness Pope John Paul II visited Ireland, the first pope ever to do so. On 3 August 1979 baby Doyle was born in Dublin and at his baptism he was christened John Paul, known generally in rugby circles as JP.

JP was educated at Terenure College, the Carmelite foundation in Dublin with its strong rugby tradition, and then at St Mary's University College in Twickenham which specialises in the education of teachers. Off JP went to become a primary school teacher, but now he is a full-time, professional rugby referee.

It is a common route for referees - player-injury-schoolmaster-referee. JP was injured and had surgery to his back. Off he went to join the London Society of Rugby Referees, the biggest such society in the world. That was in 2002. Since then his progress has been good - England;'s national panel in 2006 and then in 2008 the professional panel. Now he is one of the eight referees at the Junior World Championship, his third tournament for he was in Argentina in 2010 and Italy in 2011.

He has refereed Test matches. In the European Nations Cup JP has refereed Romania vs Georgia, Romania vs Russia and Germany vs Russia. He has also refereed French Barbarians vs Tonga. There were other Top matches in the Heineken Cup and England's Premiership. He rates his highlights up to now as the Commonwealth gold medal match at the Sevens in 2010 and the Final of the LV= Cup final in 2012.

JP speaks of Tony Spreadbury as a great help in his career and of role models Roger Federer and Captain Ian Martin.

What he likes about refereeing: "I love being in the middle of all the competition. It's the best seat in the house.