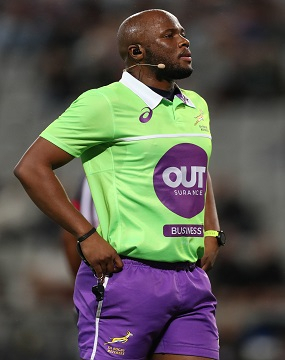 After the article on the creation and development of referees, a query arrived about what happened when the score seemed to be change in a Varsity Cup match. We have a look at it.

At the end of the Varsity Cup match between the Shimlas of the University of the Free State and the University of Johannesburg (UJ), the scoreboard read 27-26 in favour of UJ after a first-half try by UJ had been recorded first as a five-point try, then as a seven-point try, which put UJ a point above Shimlas.

The Shimlas management expressed their concerns to the referee, believing as they did that it was a five-point try. The try was examined and found not to be a seven-point try after all, and the score became 26-25 in favour of the Shimlas.

Let's look at what happened.

In the Varsity Cup, a try carries more points if it comes from afar. In this match, with the score at 25-20 to Shimlas, UJ scored a try from afar and it was eventually recorded on the scoreboard as a seven-point try, that is a try which started in the scorer's half of the field.

Law 6 DUTIES OF THE REFEREE AFTER A MATCH
17 The referee communicates the score to the teams and to the match organiser.

In this case, the referee realised that the try's origin needed examination. He did not confirm the score as 27-26, but looked at the recording of that try in order to be clear on where it had started from.

The Shimlas kicked the ball into touch. About five metres inside the Shimlas half, UJ took a quick throw-in to their flyhalf PW Steenkamp who was inside the UJ half. Steenkamp started a counterattack and passed to flying wing Siphiwe Mazibuko who raced away the score, which was recorded as a seven-point try.

According to Varsity Cup rules, the seven-point try is for a try "originating from your own half".

This try originated from the quick throw-in from touch. That throw-in was taken from within the Shimlas' half, not in UJ's half. It did not qualify as a seven-point try.

And so when the referee confirmed the score it was 26-25 to Shimlas.

Before 1892, when the referee became the sole judge of fact and law and the keeper of the score, disputes were allowed and could be referred to the body organising the match. In this case it would have been the Varsity Cup organisers. That did not happen. This was not a pre-1862 case at all.

But it's a pity that the referee was not the one keeping score.