Law discussion - in out in 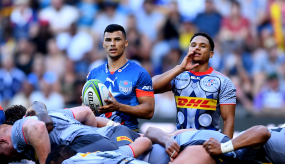 It all happened in the blink of an eye, so much so that it went undetected at a scrum.

In the 34th minute of the match between the Stormers and the Bulls, Scarra Ntubeni, the Stormers' hooker, knocks on a pass from scrumhalf Herschel Jantjies, and so the Bulls have a pout into the scrum. Scrumhalf Ivan van Zyl of the Bulls puts the ball into the scrum - inevitably skew - and the ball comes shooting out, presumably after hitting hooker Jaco Visagie's foot. It shoots out, strikes Van Zyl's left foot and shoots back into the scrum. It happened in the blink of an eye and play goes on.

Should it have gone on?

Law 19.34 RESETTING A SCRUM
When there is no infringement, the referee will stop play and reset the scrum if:
e. The ball is unintentionally kicked out of the tunnel.

When the ball came out of the tunnel, play had not been restarted, the scrum had not happened, and the scrum should have been reset.

But the ball went back into the scrum.

Law 38 Other restricted practices at a scrum include:
d. Bringing the ball back into the scrum once it has left.
Sanction: Free-kick.

This does not apply in this case as there was no scrum when the ball came out of the tunnel.

The matter of returning the ball to the scrum does not apply. What should have been applied here was a resetting of the scrum.

It is what the referee would have done if he had seen clearly what had happened in the blink of an eye.