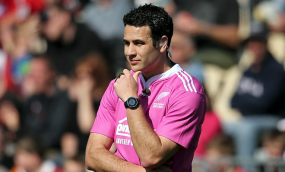 The rain bucketed down in Hamilton and still the rugby-starved crowd filled the Waikato Stadium, something last achieved in 2006 - and they were glad to be there despite the rain and despite their team's defeat. Perhaps it was the relief of doing something normal min these horribly abnormal times.

Not because of the weather or of Covid-1009, this, the third Aotearoa match, again as the referee  insisted that the laws around the tackle be observed.

There was a total of 12 scrums in the first round of Super Rugby Aotearoa; in this match there were 10 scrums. None of the 22 scrums in three matches has been for unplayable tackles. There were just on 180 tackles in this slippery match and none was unplayable - just 19 penalties and 160 tackles where the ball was free for play to continue.

There were two changes from the first round - penalties (two, both against the Blues) at the maul and resets at scrums. All the scrum resets were on the Chiefs' ball and one was when the scrum collapsed. But the scrum feed looked straight and there were even two tightheads.

There certainly is an effort to get the game going more speedily - and it's working and is likely to work even better as the players learn to conform to the requirements of the law. And please - the referees are applying the laws, not interpreting them.