Law discussion: Crawling for a try? 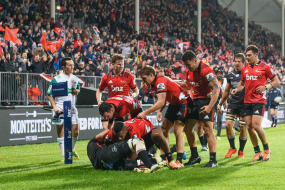 The Crusaders attack the Lions. They go wide right to fullback David Havili who has joined the line. About 20 metres from the Lions' goal-line, Havili passes to Sevu Reece. The strong Fijian has an overlap and races for the line as Lions players cover.

Reece gets away from Aphiwe Dyantyi and sends Kwagga Smith flying as he runs for the line. Hooker Robbie Coetzee goes low. His arm strikes Reece's lower leg. causing him to stumble. He has the ball in his right hand/arm and puts down his left held to keep himself from the ground. He keeps going forward, past Ruan Combrinck and over the line.

The referee consults his assistant and then the TMO, saying that his onfield decision was a try, which means he had seen clear grounding. But he asks if Reece had been "clearly" held and then propelled himself forward. The TMO reports that Reece had not been held. The referee awards the try.

The "not held" part is important, because it means that at no stage from getting the ball and scoring the try was Reece tackled.

LAW DEFINITIONS
Tackle: The method of holding a ball-carrier and bringing that player to ground.
Tackled player: A ball-carrier who is held and taken to ground by a tackler or tacklers.

Not held = no tackle.

Law 13 Players on the ground in open play
Principle
The game is played only by players who are on their feet.

LAW DEFINITION
On feet: Players are on their feet if no other part of their body is supported by the ground or players on the ground.
go to ground

There is, it seems, no definition of go to ground, unless it is contained in not being on their feet.

Law 14.2 Being brought to ground means that the ball-carrier is lying, sitting or has at least one knee on the ground or on another player who is on the ground.

Reece's knees are off the ground but really it may be all about momentum here.

From the time he gets Havili's pass till he scores, Reece if moving forward with great speed and strength. That is his momentum - continuously forward. His hand down may be add to his momentum. It may equally be just to stop him from going to ground. It would be different if his body had been on the ground and his forward movement stopped. If he had then restarted it, he would be penalisable as a player on the ground with the ball and not taking one of his three options (in Law 13 above).

The try is the correct decision.