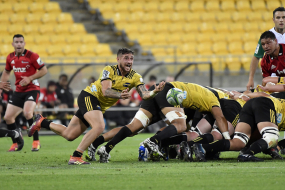 After 24 minutes in the first half of the Super Rugby match between the Hurricanes and the Crusaders, Bryn Hall, the Crusaders' scrumhalf, puts the ball into a scrum.

The Hurricanes get a powerful surge forward and the scrum wheels. The ball comes out on the other side of the scrum from where Hall had put the ball in. The referee penalises the Crusaders for illegal scrummaging.

TJ Perenara, the Hurricanes lively scrumhalf, had darted around the scrum as it wheeled about. He grabbed the ball and took a tap kick for the penalty.

In the wheeling of the scrum, Matt Todd, the Crusaders' left flank, had wheeled with the scrum and was behind Perenara when Perenara took the tap kick. As Perenara takes the kick, Todd accelerated towards Perenara and seemed to make contact with Perenara. Perenara spilled the ball. The referee immediately penalised Todd and showed him a yellow card.

What follows this is something that does not belong in rugby. Clearly angry and gesticulating, Todd argued with the referee. This was an action which falls under Law 9 which deals with Foul Play.

But back to the penalty and the yellow card.

Law 20.12: OPPOSING TEAM AT A PENALTY OR FREE-KICK

a. Intentionally infringe any law of the game.

In the referee's judgement - which is the one that counts - Todd had deliberately acted to stop Perenara from playing quickly as he was entitled to do.

This way of acting is sometimes referred to by referees as cynical, acting purely out of self-interest without regard to the provisions of the game and the sportsmanship it hopes to achieve. It was more than just an infringement. It was an infringement with intent.

A player who commits foul play must either be cautioned or temporarily suspended or sent off.

The referee used the second option, as he was entitled to do.