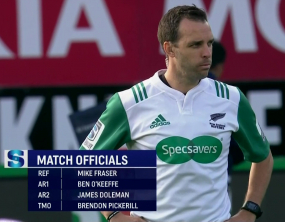 There were 43 000 at Eden Park in Auckland on Sunday to watch the Blues play the Hurricanes, the biggest Super Rugby crows in the great ground since 2005. And they saw their side win an exciting 30-20, three tries each.

Those were the stats that matter. It is also worth noting that there were 31 penalties in the match which did not stop a match with over 250 passes and over 130 tackles in producing the six tries. A lot of rugby was played and it happened quickly.

There is clearly a real effort by the players to make tackles quick and clean. That said there were 23 penalties for tackle offences - ball carrier holding on, side entry, going of feet, not rolling away where rolling to the side is required. That is much as it was in the match between the Highlanders and the Chiefs on Saturday.

But there was little delay at tackles, whether the emergence of the ball or the penalty.

It is easy to label  the refereeing as pedantic, but the referees have being carrying out instructions in applying the laws as the laws say the tackle should be refereed but have become lax, probably to the detriment of the game.

The players well see what is happening and make the adjustment required in unlearning bad habits.

There were nine scrums in this match. They took produced quick action. The first one was reset but that was the only one reset, and there were three penalties and a free kick. Those four sanctions happened quickly.

There is clearly the opportunity for the game to be faster - which is what most people like.

The great, clever thinker, GK Chesterton once said:  'The Christian ideal has not been tried and found wanting. It has been found difficult; and left untried.' It may just be possible that the same could be said of the laws of rugby football - till now.