Law discussion: That knock-on in that semi 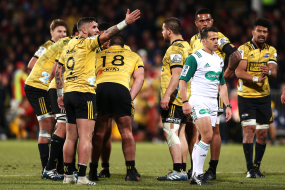 They both go to ground. Vaea Fifita (20) of the Hurricanes and Sam Whitelock of the Crusaders arrive simultaneously and make immediate contact with each other over the tackle and on their feet. Perenara arrives and is in the process of picking up the ball when Whitelock's big left hand goes over the ball.

The ball is lost and the referee blows his whistle and orders a scrum to the Crusaders for a knock-on by Perenara, who is visibly upset by the decision.

The Crusaders win the scrum as the final siren sounds and Richie Mo'unga kicks the ball into touch to book the Crusaders' place in the final.

There has been upset at the decision, especially in the Hurricanes' camp. There were claims that Whitelock had handled the ball in the ruck, that he had slapped the ball from Perenara's grasp, which was cynical, and that Perenara had not knocked on at all.

DEFINITION
Ruck: A phase of play where one or more players from each team, who are on their feet and in physical contact, close around the ball, which is on the ground.

There is no ruck, because the ball is not on the ground. Barrett is holding it up.

But is what Barrett does legal?

Barrett is not wholly legal.

Are Whitelock and Fifita legal, with more emphasis on Whitelock than Fifita?

Law 14.8 Other players must:
a. Remain on their feet when they play the ball.
c. Arrive at the tackle from the direction of their own goal-line before playing the ball.

Whitelock and Fifita arrive legally and stay on their feet

Perenara first puts hands to the ball in the action of picking it up. Then Whitelock puts his hand beyond the ball in an attempt to pull it from Perenara's grasp and back towards the Crusaders' side.

Go from Law 1 to Law 21.18 and you will not find anything that says that what Whitelock did was illegal.

The shape of Whitelock's hand suggests he was attempting to get/pull the ball back and does not a knock it on.

The only question left is whether it was a knock-on by Perenara or not.

Accept that the ball goes from Perenara's hand towards the Crusaders' line, but does he lose it or was it taken from him? If it was the latter, play could have been allowed to go on.

The referee was in an excellent position and had a clear view of what happened. He decided that Perenara had lost the ball forward and that it was a knock-on.

It would seem that complaints of cynicism or gross error are unfounded.