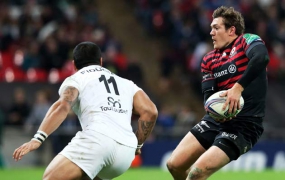 Why on earth is this in the rugby union law book? Is it there just to ensure that the laws of the game are too complex for even the best human minds? We have a Heineken Cup incident to hang our point on.

In Toulouse in Round 5 of the Heineken Cup, Toulouse play against Saracens - two top sides, the leader of France's Top 14 against the leader of England's Premiership.

Young Jean-Marc Doussain, playing flyhalf for Toulouse, kicks high, Clément Poitreaud of Toulouse chases. Waiting for the ball five metres or so from his line is Alex Goode, the Saracens' fullback. Both gets their hands up for the ball but Poitreaud wins it. A maul forms and goes to ground.

The referee awards the scrum to Saracens, giving the signal of the clenched fist to the upper chest, a signal that the ball had been taken into the maul by Toulouse and the maul had become unplayable, thus turning possession over in a scrum to Saracens.

Law 17.6 UNSUCCESSFUL END TO MAUL
(b) A maul ends unsuccessfully if the ball becomes unplayable or collapses (not as a result of foul play) and a scrum is awarded.
(c) Scrum following maul. The ball is thrown in by the team not in possession when the maul began. If the referee cannot decide which team had possession, the team moving forward before the maul stopped throws in the ball. If neither team was moving forward, the attacking team throws in the ball.

The decision is the correct application of this law - despite the vocal anger of the home crowd.

There is a stoppage at this stage as Gael Fickou has a bleeding cut under the eye.

While Fickou is being attended to, the referee gets the word from an assistant referee that he was wrong as the maul had been formed immediately from a kick and so the referee then changed his mind and awarded the scrum to Toulouse. He explained his changed decision to the players - that the maul had formed immediately from a kick, thus allowing Poitreaud no opportunity to play the ball. And so it was a scrum to Toulouse in an attacking position. The Saracens scrumhalf, Neil de Kock, clearly did not agree with the decision but did not argue. From the scrum Toulouse attacked and eventually goaled a penalty.

Was this the right decision?

Law 17.6 (h) Scrum after a maul when catcher is held. If a player catches the ball direct from an opponent’s kick, except from a kick-off or a drop-out, and the player is immediately held by an opponent, a maul may form. Then if the maul remains stationary, stops moving forward for longer than 5 seconds, or if the ball becomes unplayable, and a scrum is ordered, the team of the ball-catcher throws in the ball.
“Direct from an opponent’s kick” means the ball did not touch another player or the ground before the player caught it.

It does not take much of the law to tell you that the decision was wrong.

from an opponent's kick

Poitreaud's team-mate, Doussain, had kicked the ball. All the rest that follows is irrelevant, including whose ball it is to throw-in at the scrum.

If this decision is wrong in a top match with top match officials, imagine the mistakes made lower down in the game. It is not the only sort of mistake made in this regard.

Notice that a maul has to form. This sort of thing happens only from a maul. If there is no maul, it does not apply.

If there is a maul from a kick-off, a drop-out of a team-mate's kick, the scrum is awarded to the team that did not start the maul.

It is hard to justify something so esoteric and with so many ifs and buts.

Rugby would surely not suffer if this law was quietly dropped.