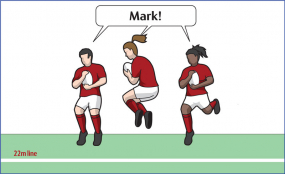 Change the laws and you change the game. That is why there is great circumspection when law changes are suggested.

We have listened to a couple of savants and have decided to take a chance and suggest three changes that may well be beneficial to the game and not open the door to malpractice - or what can be considered malpractice.

1. marking outside the 22;
2. bouncing a kick into touch from your own half gives you the lineout;
3. no punt, drop or place kick for a scrum infringement.

The mark (fair catch) dates back to the very first written laws of the game - way back to 1846. From an essential part of the game, it has been relegated to the periphery, its importance from time to time reduced.

It used to be that you could claim a mark from a kick anywhere in the field. Then some kicks were excluded, it could only be from within your 22, then the opponents had to put the ball into your 22, not taken back by your own team.

One of the consequences of this has been the box kick which some scrumhalves love so much, even preferring it to passing to the flyhalf.

The suggestion is that a mark be allowed to be claim outside of the catcher's 22 but that there not be a free kick but a scrum where the opponent kicked the ball.

The purpose of the change would be to discourage kicking.

2. Bouncing a kick into touch from your own half gives you the lineout

The suggestion is that if you kick towards touch from within your own half and the ball bounces into touch you get the throw-in from touch.

Opposition to this change expresses that this may increase the amount of kicking, thereby reducing the amount of running with the ball.

Those in favour suggest that it will in fact increase the running option, for the defence may well drop a wing back to counter the diagonal kick, thus presenting the team with the ball with the alluring prospect of an overlap, encouraging them to run all the more.

And if there is a lineout it will be inside opposition territory, again making attacking with the ball in hand an attractive prospect.

3. Only tap kicks for a scrum infringement

In ancient days, it was possible to win a match with things that are no longer penalties at all - like foot up and not putting the ball in straight. Those, if they are blown up at all, are free kicks.

The argument here is that the scrum is merely a way to get play started again and should not be a source of points. Instead if the referee judges that a team is responsible to collapsing a scrum or any related infringement that now calls for a penalty, it now becomes a tap kick at the place where the scrum puts the ball in. Taken quickly with the opposing forwards out of play for being within 10m of the tap while the non-infringing forwards are all in a good position to join in the play would present the non-infringing team with great attacking opportunities.

Referees work very hard to get scrum decisions right and still they are accused, at least by smirking props, of getting them wrong. This may take some pressure off referees.

These are just thoughts. It may be that there could be a downside, but the suggestions are worth thinking about.