Law Discussions - The mark for kicks 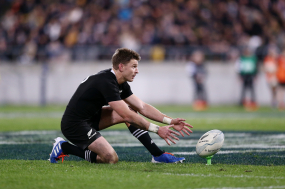 There are two incidents from last Saturday's match between South Africa and New Zealand in Wellington, New Zealand, which have caused much discussion, both relating to the place for kicks at goal, a penalty and a conversion.

Let's deal with the penalty first.

The kick was taken from the wrong place. That is wrong.

But there is more to this than just taking it from the wrong place. Barrett creates the wrong place, seemingly quite deliberately, something akin to ball-tampering in cricket for which Smith and Warner sare still being booed in Edgbaston, 17 months later.

A look at the Barrett situation suggests that the kick was an easy one anyway and so there was no need to cheat, unless it is an ingrained habit. It's sad if this is the case and deserves much more than just "re-taken".

Law 9.7 UNFAIR PLAY
A player must not:
a. Intentionally infringe any law of the game.
Sanction: Penalty.

Pre-abbreviated laws are more explicit in Law 10 which deals with Foul Play.

And in its Definitions in Law 10, it says: Foul play is anything a player does within the playing enclosure that is against the letter and spirit of the Laws of the Game.

Law 10.2 UNFAIR PLAY
a. Intentionally offending. A player must not intentionally infringe any Law of the Game, or play unfairly. The player who intentionally offends must be either admonished, or cautioned that a send off will result if the offence or a similar offence is committed, or sent off.
Sanction: Penalty kick.

But, of course, to do that the player must be seen to be playing unfairly. In a case such as this, with the referee otherwise occupied and this assistants on their way to the posts, the TMO is best positioned to see the unfair play and it is within his protocol to suggest that the incident be checked, when it says: "The review of potential 'clear and obvious' acts of foul play or to assist in the determination of sanctions for foul play."

The argument that "everybody does it" does not hold water, as your mother told you many a time.

In fact many of the laws of the game have come about because of cheating.

2. Mark of Conversion (80 minutes into the match)

Time is running to an end when Cheslin Kolbe of South Africa gets a clever pass from Willie le Roux and races down the touchline on his right. He chips infield where scrumhalf Herschel Jantjies of South Africa beats Aaron Smith of New Zealand in a contest for the ball which bobbles before Jantjies gets control of it and scores a try. The dash lines marking 15 metres in from touch are visible and where Jantjies grounds the ball is about half a metre closer to the goalposts than the 15-metre line.

The referee consults his assistant referee and then the TMO to ensure that there was no knock-on, for it would have been a knock-on if the ball had gone from Jantjies's hand or arm into contact with Smith.

The advice from the TMO is that there was no knock-on and so the try could be awarded. The referee awards the try and Handré Pollard takes the conversion to the right of the 15-metre line, about 13 metres in from touch or about two-and-a-half metres nearer the touch line than where Jantjies had scored - a more difficult position than it needed be.

Law 8.7 CONVERSION
When a try is scored, it gives that team the right to attempt a conversion, which may be a place-kick or drop-kick.
The kicker:
b. Takes the kick in the field of play on a line through the place where the try was awarded, parallel to the touchlines.

It would appear that the try was awarded further out from the goalposts than it should have been, but to see any sort of conspiracy in it is ridiculous.

In this Wellington case, the referee's first job was to consult his assistant and then the TMO. He would have erred if he had not done so. That demanded his concentration and so he erred slightly in the place for awarding the try, which, mercifully, did not affect the outcome of the game.

It would not have been within the TMO's protocol to have intervened in this matter.

With the Australian score on 2, David Warner is given out LBW by the highly experienced umpire. Later ball-tracking on TV showed that the ball would have missed leg stump and Warner should not have been given out. Nobody considered that Aleem Dar was cheating. It was a mistake - right at the beginning of the game and with no distractions - not at the hectic end of a highly charged match with the distravction of clearing up uncertainty about a possible iknfringement.