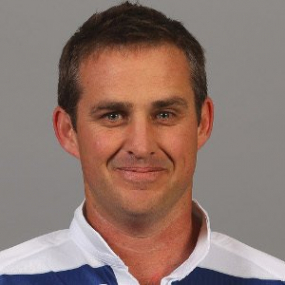 On 13 June 2020, despite the worst efforts of coronavirus and its Covid-19, high-level rugby will start in New Zealand when Super Rugby Aotearoa kicks off at Forsyth Barr Stadium in Dunedin. And they will have a little of their own way of doing things.

Aotearoa? It's the Maori name for New Zealand - the land of the long white cloud.

Before kick-off, the New Zealand Rugby Union has announced a law adaptation, the procedure in the event of a draw at the final whistle and a request to referees.

The law adaptation concerns the much-discussed use of sanctionary cards. In this tournament, a player red-carded, i.e. sent off - may (= is allowed to) be replaced  after 20 minutes. He may not return to the match but another player may come on as a substitute so that the team may play on with 15 players.

The competition regulation concerning a match drawn at the end of the normal playing times (80 minutes) states that there will be a maximum of 10 minutes of extra time in which the golden-point rule will apply, i.e. that the first team to score wins the match.

The points' allocation to matches is four for the winning team and one for the losing team, two points for a draw at the end of extra time, and one point to a team scoring three tries or more than their opponents.

Thirdly, the referees have been asked to apply strictly the post-tackle laws so that the game can be played at a faster pace - and so be more attractive to the crowds, which in Super rugby have been dwindling.

“We want this competition to look and feel different. We’ve had great support from our coaches, players and referees to make Super Rugby Aotearoa faster, safer and more exciting than ever before."

On the golden-point regulation. Lendrum, said: “Draws can often leave everyone feeling a little empty and after feedback from our coaches and players we have added the golden point rule. We’ve seen the excitement it can generate in other codes and we think this adds a real edge.”

The former Test referee and current manager of New Zealand's referees, Bryce Lawrence, said: “Fans enjoy Super Rugby because it’s a fantastic spectacle and our referees like to allow the game to flow. We’re confident we'll see a contest that is faster, fairer, safer and easier to understand.

“We're not changing the laws of the game - we're being stricter about how we referee them.”

The key focal points for the referees at the breakdown are summarised below:
* Ball carriers will be allowed only one dynamic movement after being tackled.
* Crawling, or any secondary movement other than placing or passing, will be penalised.
* Tacklers will be expected to roll away immediately in the direction of the side-line. This will be a referee’s “number one priority” at the tackle.
* There will be "extra focus” on the offside line with defenders expected to be “clearly” onside to provide attacking teams more space.

The intentions are certainly good.