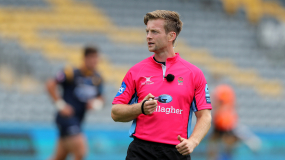 The Gallagher Premiership Rugby action continues to come thick and fast, with an enticing set of midweek fixtures to look forward to in Round 19.

Tuesday night sees high-flying Bristol Bears welcome Northampton Saints to Ashton Gate in a match which will be overseen by Tom Foley, with Jack Makepeace and Simon McConnell his assistants, Wayne Barnes in the TMO seat.

Karl Dickson is the man in the middle at the Ricoh Arena and will be assisted by Ian Tempest and Hamish Smales – fresh from his Gallagher Premiership refereeing debut at Kingsholm on Saturday.

Gloucester were victorious on that occasion, beating London Irish 36-23, and will hope to take that confidence into their tricky trip to Devon. Christophe Ridley will be in control at Sandy Park, assisted by Sara Cox and Paul Dix, with Geoff Warren in place as TMO.

Craig Maxwell-Keys will get Sale Sharks’ clash with Saracens underway at the AJ Bell Stadium. Sharks have won three on the bounce, scoring 100 points in the process, and will hope to avenge the 36-22 defeat at Allianz Park in Round 10. Wayne Falla and Peter Allan are Maxwell-Keys’ assistants, with Trevor Fisher the TMO.

Harlequins have the novelty of an ‘away’ game at their Twickenham Stoop home, with London Irish on hosting duties at their temporary base. Matthew Carley will oversee the clash between the two sides from the capital, with Luke Pearce and Tom Foley assisting; the TMO is Stuart Terheege.

At The Rec, play-off chasing Bath Rugby host Worcester Warriors under the watchful eye of Andrew Jackson. The reverse fixture in Round 10 saw Bath edge a tight game 22-21 and they will attempt to complete a league double. Jackson’s assistants are Adam Leal and Phil Watters, with David Rose on TMO duties.