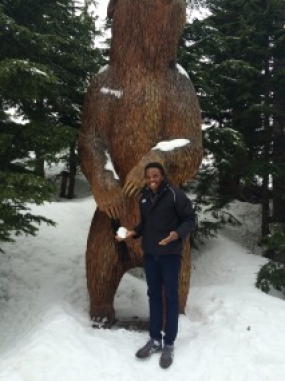 Rasta refereed the Sevens Final in Las Vegas and has now gone north to Vancouver in British Columbia for the Canadian Sevens.

After a great tournament in Las Vegas where the teams were tested on an artificial pitch, it was time to jet to Vancouver where we were greeted by the cold-wet weather that’s unforgiving if one is under-dressed for the conditions. It’s always special going to a new place and experiencing a different culture.

We won’t have the opportunity to play rugby in the snow but it was special going up to the Grouse Mountain to view the famous mountain and throw snow balls at each other.

This is the first World Series tournament to be hosted here in Canada and for Canada to have a sell-out crowd for the two day tournament is the start of a new era in the North American continent. This is evidence that this is the fastest growing sport in the world and we are privileged to be part of it.

I could harp on the great aspects that are coming up but if I sit and reflect back on the roots of the World Series and the contributors that got the sport where it is today, I could thank endless people for their great contributions.

A special thanks goes to our late Beth Coulter, who was instrumental in organising the 10 stops and ensuring Vancouver was the new addition to the World Series.

There is a hype about Sevens been played in an indoor stadium and this has created a lot of excitement for players and officials. We have had the opportunity to visit the stadium as it's within walking distance of our hotel.

When one walks on the pitch, it feels as if you are walking into the colosseum. Its aura and appeal is one of a kind and we are all geared up to make it a successful tournament for the teams, viewers and all passionate people of the rugby community.

Week two of every tournament presents everybody with new challenges and goals. The beauty of Sevens is that one can’t be complacent and rest on his or her laurels, as the sport keeps moving forward with different challenges.

This week we see some teams have some changes because of injuries, rotation policies and strategic planning which presents us with new dynamics. We will be participating on an artificial turf again and I see a lot of teams targeting this tournament to start getting momentum on the World Series standings and getting continuity in their game plans.