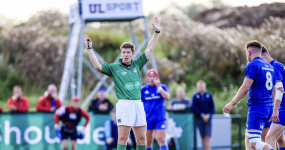 His trip was to Ireland. He tells us about it.

I got the opportunity to referee in Ireland after the Irish Rugby Football Union extended an invitation to the South African Rugby Union (SARU) to nominate an official to take part in their annual Interprovincial Under-18 tournament in Limerick. I accepted SARU’s nomination without hesitation and set off on what was my first time in Ireland.

After flights were cancelled from Heathrow to Shannon (because of an earlier aircraft that had caught fire) we were redirected to Cork and from there took a bus to Shannon. Despite the seven-hour delay, I enjoyed seeing the countryside and meeting new people on the bus.

Limerick is a major city in the Republic of Ireland, set in Munster province in the south of the country. St Mary's Cathedral and King John's Castle are some of its most recognisable sites.

The residential festival at the University of Limerick grounds was a chance for squads from IQ Rugby and the four Irish provinces of Munster, Leinster, Ulster and Connacht to live in a professional rugby environment over 10 days. Apart from the three rounds of Interprovincial Championship action, players benefited from personal development, one-on-one video-based coaching, mental skills and nutritional workshops.

The competition amongst the different provincial sides were fierce, and the boys played with a lot passion. I have no doubt that some of the players who participated in this year's competition will go on to represent Ireland one day. The rugby was of a high standard and I could compare it to our annual Craven week.

The facilities were world class and, despite torrential rain on some days, the 4G Astro pitch remained in pristine condition.

Together with matches in the first two rounds, I refereed the final match of the championship being the Interprovincial decider between Munster and Leinster schools. A late penalty earned Munster the win by 23 points to 20. This earned Munster the Dudley Cup, but Leinster’s better record over the three-round tournament ensured that they won the overall Championship. This meant trophy's to both teams which was really a fitting end to a great game and tournament overall.

The people in Ireland are extremely hospitable and light-hearted. I enjoyed the Irish music, the countryside as well as the odd trip to one of their many local watering holes! I also realised that in Ireland it is not uncommon to apply sunblock while carrying your umbrella with you as you would invariably be exposed to four seasons per day, every day!

Our sightseeing activities included a walk along the breathtaking edges of the Cliffs of Moher in Doolin, we briefly saw Thomond Park (the home of Munster rugby) and had ice cream on the beach in Lahinch.

All in all this was a most memorable trip and I am extremely grateful to Mr Banks Yantolo and the rest of the Referee Department at SARU who afforded me this opportunity to experience the wonderful culture, rugby and sights of Ireland.