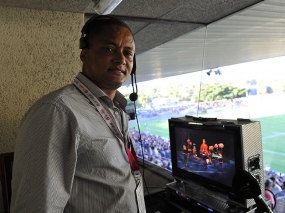 Shaun Veldsman, one of the big achievers amongst South Africa's referees has decided to call is quits on his involvement in refereeing.

His has been a long and glorious career. But he will be 53 next month and decided that "it was time - a time to leave on my terms and to give another an opportunity to achieve great things".

The truth is that he still has a great deal to give to rugby refereeing in South Africa.

Born in Worcester in the Western Cape, he became a schoolmaster till he joined the Old Mutual, and now is an area manager, resident in the beautiful town of Robertson with its lovely wine.

In fact, he has lived in Robertson most of his life and that is where his home with wife Marie is and where children Shannon and Marishan have grown up.

His rugby birth also started in Worcester, playing for the Young Hamiltons club. Going from playing and school teaching to refereeing is a common step and he says: "I wanted to do something (not admin) and in the old days clubs were forced to register referees – and I was asked by my colleague to make myself available."

His serious commitment to refereeing started in 1997 was a member of the Boland Referees' Society, and he flourished. He refereed at Craven Weeks, became a provincial referee in South Africa and then a Super 12 (as it then sensibly was) and then a Test referee.

2003 was a great year for him, as in that year, he refereed the final of the Currie Cup when the Blue Bulls beat Natal 40-19 at Loftus Versfeld and in that same year he refereed his first Test - Argentina vs Canada in the Pan American Championship in Buenos Aires when the Pumas won 62-22.

When injury (and ageing) struck, Veldsman grasped the opportunity to become a television match official (TMO), and there he also excelled, graduating from provincial to international, from Currie Cup, Super Rugby and Pro 14 to some 80 Tests and the World Cups of 2011 in News Zealand and 2015 in England.

This week it will be his swan song at the Currie Cup Final, his third Currie Cup final as a TMO. In 2006, he was the TMO to Jonathan Kaplan in Bloemfontein when the Free State and the Blue bulls drew.

But Veldsman also says: "It is really an honour to be involved in such a competition as the Currie Cup."