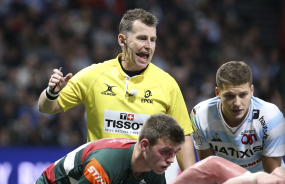 PRO14 has announced the referees for the two play-offs for semifinal spots, play-offs that could be referred to as quarterfinals.

Two sides have already qualified for semifinals - Leinster and Glasgow Warriors, leaving four to fight it out for the other semifinal places.

The referee selection panel is chaired by PRO 14's manager of referees, Greg Gamer, and consists of the referee managers of the various participating teams.

Garner said of the appointments: "Our analysis and grading of our referees has improved greatly and along with the referee managers from our unions we have worked hard to remove subjectivity from our review and selection process. We have a clear picture of who our best performing officials are and they have earned the right to be involved in the biggest games of the season.

"With so much at stake in these games it is vital that we put the best referees in charge and that they are leading a team of four that includes the assistant referees and television match officials. The support of the team was a key point of our recent camp and the guys are fully aware that this is the best way to ensure the right calls."