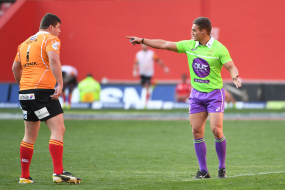 Rugby in South Africa is well and truly back as Super Rugby Unlocked gets underway in Durban on Friday, 9 October 2020.

The Cell C Sharks and The Emirates Lions gets the competition going, followed by the Toyota Cheetahs hosting the Phakisa Pumas in Bloemfontein and the Vodacom Bulls welcoming the Tafel Lager Griquas in Pretoria, the following day, respectively.

After a successful opening round of the 2020/21 Guinness PRO14 season, the action continues. This week sees IRFU’s Chris Busby take the whistle for his first appointment in the Championship. Earlier this year, Busby refereed two U20 Six Nations games, while also refereeing second division games in France.

An ex-player who turned to refereeing after a bout of injuries, Chris has been working closely with the IRFU Referee Development squad ahead of the fixture. Busby is joined by Welsh trio Adam Jones, Craig Evans and Sean Brickell as Dragons take on Zebre at Rodney Parade.