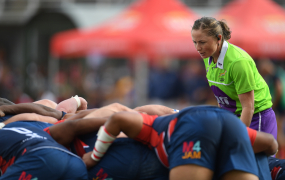 In South Africa, the great Currie Cup starts. The competition goes back to 1890 and has had the Currie Cup as its naming trophy since 1892.

It has lost shine since the start of Super Rugby and the increasing multitude of tests but it is still far and away South Africa's most important domestic competition.

In Kampala and Harare, the Victoria Cup is being resuscitated with four countries taking part - Kenya, Uganda, Zambia and Zimbabwe. It take the place of Africa's Gold Cup.

In California, the land of earthquakes, this week there at the second and third rounds of the Women's Super Rugby Series.

At Estadio Martins Pereira in São Jose dos Campos, a city in southeastern Brazil, there is the 12th edition of World Rugby's Under-020 Trophy with Kenya surprisingly replacing Namibia as the African representative. The winner of the trophy will be promoted to the 2020 Under-20 Championship while Scotland will come into the Trophy from the Championship.