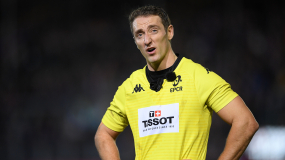 Andrew Brace has been appointed as the match referee for the PRO14 Final between Leinster and Ulster at the Aviva Stadium.

The 32-year-old is in line to make his 55th Championship appearance and his first in the title decider. It caps an impressive season for the Irish official who was chosen as an assistant referee for the World Cup in Japan, received his first Guinness Six Nations appointment in February and follows up his first knock-out appearance in the PRO14 Championship with this selection.

Brace, a full-time professional referee, made his PRO14 debut in 2015 and earned further recognition at the Junior World Championships and Under 20 Six Nations the following year. Having taken charge of the Leinster v Munster semi-final the Cardiff-born match official is in line to make his ninth appearance of the season.

Frank Murphy and George Clancy have been appointed as assistant referees with Brian MacNiece fulfilling the role of Television Match Official. All of the appointments are IRFU match officials.

Greg Garner, Elite Referee Manager for PRO14 Rugby, said: "Over the past number of years we have gathered more performance data on our match officials and created more stringent review processes to push our referees to the highest standards. As a result, we now have a number of world-class referees within our system who we could have appointed to the final."

"Andrew has taken significant steps forward in his career over the last 12 months and his performances warrant his selection for this weekend’s Guinness PRO14 Final. It is vital that we put young refereeing talent in a position to succeed and Andrew’s rise is very rewarding for the tournament and for the referee structures in the IRFU.

"I would like to congratulate all the match officials involved and wish them all the best of luck for this weekend."

Adam Leal will be the man in the middle as we are treated to a repeat of last season’s Premiership Final. Round 20 sees a five-match bonanza on Sunday rounded off with Exeter Chiefs’ trip to Saracens as the champions face the league leaders.

Leal will be joined by assistants Andrew Jackson and Gareth Holsgrove, while Sean Davey is TMO.

The round kicks off at the Ricoh Arena where Ian Tempest will take charge of his 73rd Premiership match as Wasps host Bristol Bears in a big clash which has top four ramifications. Christophe Ridley and Simon McConnell join him as his assistants while Graham Hughes will be in the TMO chair.

Then, the highly experienced Wayne Barnes is the man with the whistle for Leicester Tigers’ clash with Northampton Saints. Sara Cox continues to break new ground as she makes her fourth appearance as assistant, alongside Paul Dix with Rowan Kitt the TMO.

At The Stoop, London Irish host Worcester Warriors with Craig Maxwell-Keys the referee, Simon Harding and Phil Watters his assistants and Claire Hodnett the TMO. Sale Sharks and Bath Rugby do battle in a huge game which could decide much of the top four shake-up at the AJ Bell on Sunday afternoon.

Matthew Carley is the man in the middle for that one with Luke Pearce and Tom Foley serving as his assistants while Stuart Terheege will be TMO.

The weekend is concluded with some Monday night action as Gloucester Rugby take on Harlequins and Karl Dickson will be in charge. Christophe Ridley and Jonathan Healy are the assistant referees meanwhile Trevor Fisher is on TMO duties.