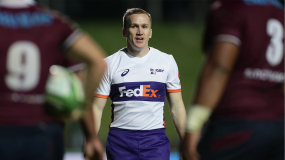 The Crusaders' unbeaten run came to an end in Round Seven of New Zealand's Super Rugby Aotearoa at the hands of the Hurricanes, while the Brumbies remain unbeaten in Super Rugby AU.

The Hurricanes ended the Crusaders' 36-game unbeaten streak at home. Heading into the match, the Crusaders required a bonus point victory to secure the inaugural Super Rugby Aotearoa title. They find themselves on the road this week to take on the struggling Chiefs.

In Australia, the unbeaten Brumbies kept the Western Force scoreless to remain unbeaten in three matches. They host the Reds on Saturday, who could overtake the Burmbies as the tournament leaders with a bonus point victory.

The winless Western Force play hosts to the Rebels in the other Super Rugby AU match of the weekend.