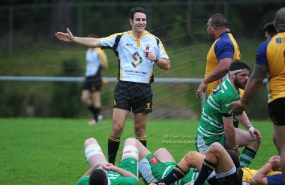 Ben O'Keeffe and Brendon Pickerill are the referees   to the two matches in Super Rugby Aotearoa, Round 2. If Round 1 is anything to go by, they will be energetic occasions watched by enthusiastic spectators at the ground and round the world - two islands of normalcy in an abnormal world.

There will be additional interest for and in referees after the number of penalties in Round 1 matches.

It is naive just to look at numbers reaching 30 per match and start talking about pedantry and blowing the game to death.

It is more seriously interest to look at the why, how and effect of the penalties.

In Round 1, the referees penalised instead of trying to "manage". The problem with management is that by the time the referee calls Release or Roll away or Get back onside, an infringement has already occurred. In Round 1 this did not happen. The referee penalised the infringement and it was all quick, clean and consistent. The players will, surely, learn to adapt.