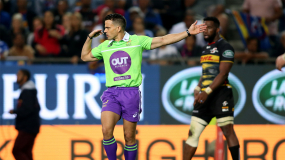 The referees for the Guinness Pro14 Semifinals have been announced while Angus Gardner and Nic Berry are the men in charge of the crucial Super Rugby Australia Round 10 matches.

Andrew Brace will referee the Irish derby between Leinster and Munster at Aviva Stadium on Friday. The following day, Frank Murphy will be in charge for Edinburgh's home semifinal with Ulster.

The selections mark the first knock-out appointments for both referees. It also marks an impressive year for Brace who refereed his first Guinness Six Nations game in February between France and Italy.

There is a refereeing debut at Kingsholm as Hamish Smales takes charge of his first Premiership match, as London Irish head west to take on Gloucester Rugby. Smales has Simon Harding & Phil Watters as his assistants with David Rose taking the role of TMO at Kingsholm.

Sara Cox follows-up her piece of history with once again assisting Wayne Barnes in the first match of Gallagher Premiership Rugby Round 18, a week after becoming the first woman to be an assistant referee in a league match when she was on duty at Bath Rugby v Wasps.