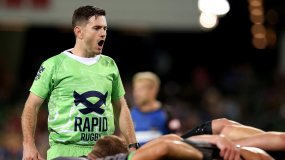 We are well and truly in the business end of New Zealand's Super Rugby Aotearoa while Super Rugby Australia has reached the mid-point of their competition.

The Crusaders are just two points ahead of second-placed Blues but with the Auckland-based franchise not involved in Round Nine, the Christchurch franchise seal the inaugural title with victory over the Highlanders.

The Brumbies will look to make it five wins from five matches on Friday when they take on the Rebels at the Sydney Cricket Ground. The Canberra franchise took the honours in the first encounter 31-23 over the Melbourne side.