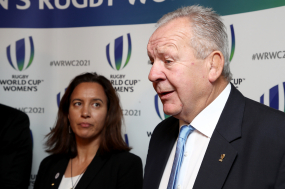 World Rugby, formerly known as the International Rugby Board, is responsible for the Rugby World Cup about to start in Japan in all its facets from finances to fixtures and on to how the game is played.

They have the duty of caring for the game, and that includes conduct in the playing of the game.

Their responsibility includes the choice of those appointed to see fair play, - the referees, the assistant referees and the TMOs as well as those who act retrospectively in discouraging foul play - the citing commissioners and those who hear cases where foul play is reported.

Referees, assistant referees and TMOs are chosen and appointed to matches. The same applies to citing commissioners.

There is a citing commissioner appointed to each match. His job is to examine incidents of foul play that the referee, his assistants and the TMO may have missed. He identifies the act and evaluates its gravity.

He works independently of teams and their feelings. There was a time when a team could cite an opponent.

Of them Absaloms, Burger, Nowland, O'Leary and Whyte have been citing commissioners at previous World Cups.

Steve Hinds of New Zealand has been World Rugby's manager of citing commissioners since 2017, the first full-time employee in what was a new position. A superintendent in the police force, he played first class rugby for Wellington and New Zealand Police and was a citing commissioner himself for over 20 years, including at the World Cups of 2007, 2011 and 2015.

Players sent off and players cited are then dealt with by an independent judicial committee.

Each hearing be done by three-man committee - a chairman plus two members of the judicial panel.

Christopher Quinlan QC is the independent judicial panel chairman, a barrister of great experience in the sporting world. Apart from his work as a circuit judge, his work in sporting fields is extensive and includes independent judicial panel chair for the Football Association, disciplinary tribunal member of the International Association of Athletics Federation, appeal board member of Table Tennis England a legal member of the National Anti-Doping Panel, the National Child Safeguarding in Sport Panel and World Rugby's Anti-Doping Advisory Committee and now World Rugby's judicial panel chairman.

Quinlan said of the task ahead: "Our collective objective since Rugby World Cup 2015 has been to arrive at this Rugby World Cup with the disciplinary process in the best-possible shape, with a strong team ethic, integrated with match officials, to achieve consistent and accurate decision-making.

"This has been achieved through regular dedicated training and calibration workshops involving judicial personnel and citing commissioners working together with the match officials to drive consistency in approach and outcome. I am very pleased with, and grateful for, the significant contributions of the former international players, referees and coaches in that process. I wish to thank all the team members and their unions for their complete support as we look forward to Japan 2019."

World Rugby's chairman, Sir Bill Beaumont, said: "This is an extremely talented and experienced group, who will work closely with the match official team during the tournament to ensure alignment. The selection of former international players, referees and coaches to the disciplinary process over the last few years has been significant in ensuring rugby empathy in cases and it is great to have people with considerable test experience, not just on the field, but as valued members of our disciplinary team."