SA Referee of the Year 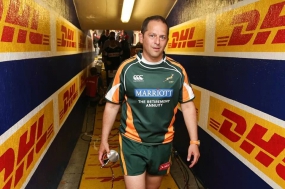 On a glittering occasion at the Lyric Theatre at Gold Reef City in Johannesburg Jonathan Kaplan was presented with an award as South Africa's Referee of the Year for 2013.

It was the fifth time that Kaplan in his glittering career has received the award for Referee of the Year but it is the most significant one because it will not happen again as he has withdrawn from professional refereeing, continuing with club and school.

Before the award was made, there were images of Kaplan from the young referee to the mature 47-year-old and Kaplan was brought onto the stage as SAU made a tribute to one of its best referees - the referee who has refereed more Tests (70) than anybody else, a referee of uniquely vast experience. In 2013 he ended his career as the emotional referee of the Currie Cup Final at Newlands between Western Province (his home province) and the Sharks who were comfortable winners. Kaplan's refereeing that day was splendid.

Asked the highlights of his career, a difficult question, Kaplan said two things - refereeing Currie Cup rugby and having the chance to referee 'my people' overseas, a South African referee refereeing in foreign lands.

Kaplan is busy on his autobiography at present.