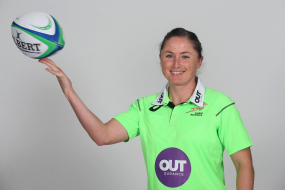 The SA Rugby Match Official Panels for 2020 were confirmed on Thursday, with 27 referees named on the National Panel, including Aimee Barrett-Theron, who handled two First Division Currie Cup fixtures earlier in the year.

The panel consists of a number of experienced match officials such as Jaco Peyper, who reached the double milestone of blowing the whistle in his 50th Test and 100th Vodacom Super Rugby match in the past season, as well as a number of promising match officials.

The complete SA Rugby Match Officials Panel for 2020 were confirmed following the annual selection and grading meeting held recently in Cape Town. This was followed by the Referees Department’s strategic planning meeting at the end of October in Stellenbosch.

SA Rugby Referees Manager, Banks Yantolo, said while South African match officials continue to play a prominent role on the international stage, a lot of work is being done behind the scenes to ensure local referees continue to perform to international standards and that a steady stream of young men and women’s referees are identified and developed with the future in mind.

The department’s strategic preparation, which last year culminated in the draft and implementation of a comprehensive mid-term plan, will ensure continue efforts will help to keep South African referees on a solid foothold.

Yantolo said: “The South African referees structures have always given us a tremendous sense of pride and achievement and it continues to do so, with our men’s and women referees once again making their presence felt in international tournaments during the year, including Vodacom Super Rugby, Guinness PRO14, the HSBC World Rugby Sevens Series and the 2019 RWC tournament in Japan.”

The promotion of three up and coming referees from the Academy Squad into the National Panel – Dylan November, Morné Ferreira and Sean Muller – will ensures a healthy influx of young match officials. Similarly, there are three newcomers onto the Women’s Panel, namely Siyanda Pikoli, Giana Viljoen and Angelic Bezuidenhout.

“We are inundated with enquiries by prospective women referees who want to follow in the footsteps of Aimee, who is doing so well locally and on the World Rugby Women’s Panel, as well as Ashleigh Murray on the World Rugby Sevens Panel,” said Yantolo.

“To have our two leading women referees, Aimee and Ashleigh, continue performing referee duties on the international stage shows we are on the right track, while we are delighted that we also have some very promising young women and men coming through our ranks.”