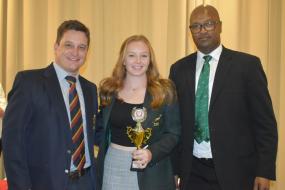 Judged by her appointments, Ashleigh, who is only 24, is the second-ranked female referee in South Africa's after high-flying Aimee Barrett-Theron. Ashleigh is about to embark on her second season as one of World Rugby's Sevens referees and earlier this year refereed her first Test matches at the qualifying tournament for the Women's World Cup to be held in New Zealand in 2021.

Her first Test was Kenya vs Uganda, her second Madagascar vs Uganda. The other country at the qualifiers was South Africa, who qualified.

Her next international appointments are to Sevens in Dubai, Cape Town, Langford (Canada) and Paris.