The Game We used to Play 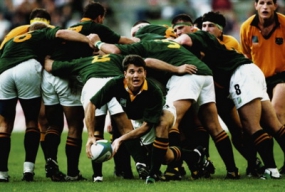 "The past is a foreign country; they do things differently there." That is the start to LP Hartley's novel, The Go-Between.

The second part of it could easily be "they play rugby differently there." And we don't have to go back 1823 and 16-year-old Billy Ellis at Rugby School to mark the difference. 20 years ago will do.

On 24 June 1995 South Africa won the World Cup at Ellis Park in a match that ran into extra time. The match kicked off at 15.00. At 15.00 on 24 June 2015, television showed a replay of that remarkable match. Many who saw it were amazed at the difference between the game played then and the game played now. It was just such a livelier game. No tries were scored and yet watching it again is a such a wonderful experience - not just for the nostalgia, not just for its significance to the Rainbow nation but for the way they played the game.

The laws were different then and if ever you want see the effect of changing the law can have on the game, watch that match in 1995 and anything you like to watch now.

Now there is an ongoing complaint about how boring the matches are and more and more crowds grow smaller and smaller. More and more rugby conversations are drenched in complaints about way the game is played.

To anybody watching the 1995 World Cup Final some differences are obvious.

In this match the scrumhalf arrived immediately at the breakdown. He arrived bent low, picked up the ball immediately and passed it to his flyhalf without lifting his head or taking steps. It was not today's stand, step and shovel. The ball went fast and accurately and usually to the same receiver.

In the Final, the scrumhalves passed the ball on 52 occasions. Of those passes 44 went to the flyhalf. Not one, not a single one, went to a tight forward, the preferred destination of the modern scrumhalf's passes, it seems. The eight that did not go to the flyhalf went to backs, e.g. a running fullback, or to a creative loose forward.

In this match of 100 minutes, the scrumhalves, both of them, kicked the ball a total of eight times, of which two could be regarded as box kicks, such a modern delight.

That meant that there were no artificially created phases which are often thought of as virtues. Dr Craven said, many years ago, that a ruck is a failure. That is true of phases. Each one is a failure of attack and the longer they go on the less likely a team is to score a try. Ten phases = 10 failures - and disappointment to the attacking team.

It is not surprising as a phases is often made by a tight forward who charges straight at an opponent, 'taking the tackle' with no hope of beating him. Ten phases often means 10 of these sterile of these slavish, predictable phases, programmed flops devoid of skill or creativity.

There were none of today's over-regulated scrums. No orchestrated setting of the scrum as there is now with its three laboured instructions and a pat on the scrumhalf's back after which the scrumhalf bangs the ball on his loosehead and then puts it in skew. It was not like that. The players got on with the scrum.

If the players got it wrong the referee penalised them, as he did four times to the All Blacks.

In this match, because there was more handling of the ball, there were 32 scrums - as against 16 when the Hurricanes played the Brumbies last week and 14 when the Waratahs played the Highlanders.

In this 100-minute match there were four penalties at tackles as against 11 in the Wellington semifinal. There were occasions when the ball was not immediately cleared from a breakdown and scrums resulted.

The nature of tackles was also different. There was one which could have been considered a high tackle, i.e. at the neck area and none that looked remotely like a 'tip tackle'.

In those days players were encouraged to tackle low which then meant below the waist. A high tackle was one above the waist and not penalisable unless it went round the neck.

The Springboks found their low tackles at ankle height the most effective way of stopping fearsome Jonah Lomu.

There was no lifting in 1995 which means that the best line-out players won most ball, as Ian Jones did for the All Blacks.

Lifting in the line-out has made them more spectacular but also more predictable.

When you looked at the 1995 players you could see that they were different. They came out onto the field, cleanshaven, untattoed, socks up, boots black. jerseys tucked into shorts, no adverts on clothing, no bandages about arms. They looked different all right. And when they scored, they behaved differently. There was no hugging and dancing, just a turn back to receive the kick-off. In the second half of extra time Joel Stransky kicked a dropped goal, the greatest score in the history of South African rugby, a moment that made diverse people into a happy nation, and he turned to run back to his half, as did his team-mates. Nobody even patted him on the back.

Cheering and hugging were for the spectators. The players went on with their playing.

But then it was the last amateur Rugby World Cup.