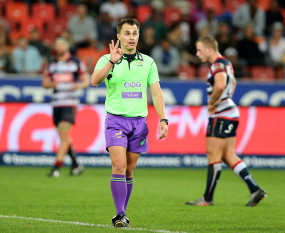 Marius van der Westhuizen was recently dropped from World Rugby's elite panel of referees, and the reason given in the media recently has suggested that his fitness has been called into question.

The elite panel, by the way, consist of roughly a dozen referees - 11 or 12 out of the many, many thousands of referees in the world. Just getting there is a feat.

Staying there is also a feat and being dropped is not a disgrace. Many referees have taken horrible tumbles in their careers and got back to their top positions again. They would include Paddy O'Brien, Wayne Barnes, Mark Lawrence, Tappe Henning and Tony Spreadbury.

The same has happened with players. Springboks who were dropped and came back again include Danie Craven, Bennie Osler and Frik du Preez - amongst many others.

It was not clear what sort of official is described as a "local official".

News 24 went a step further and described their anonymous informant as a "World Rugby official", a serious elevation from local official. Their statement said: "A World Rugby official reportedly confirmed to this weekend's Sunday Times that Van der Westhuizen was left off the list because 'there was a problem with his fitness'."

SA Rugby Magazine, did not give their informant any sort of status when it said: "Referee Marius van der Westhuizen has been dropped from World Rugby’s match official panel due to ‘a problem with his fitness’." The quote has no origin, it seems, as the article has no stated author.

In fact, the only name identified in these three instances is that of the referee. He is not anonymous.

But the worst is that the assertions of a problem with Van der Westhuizen's fitness do not exist. Tightheads, News24 and the SA Rugby Magazine writer seemed to think the "revelation" of Van der Westhuizen's omission some weeks ago important and yet did not seek to make sure of the truth of what they said. They could have done so easily enough.

The top referees are tested by a fitness expert three or four times a year - at every referees' camp. Not once did Van der Westhuizen fail an official fitness test.

One of the tests is the Yo-Yo test, a demanding fitness test similar to the Beep tests. The pass mark for a top referee is 18,1. Van der Westhuizen's consistent mark is 19,3. Richie McCaw did 19-2, Sonny Bill Williams 19, Conrad Smith 19.4, and they had to tackle and be tackled, push and jump apart from running.

There is also much made in all three articles that Van der Westhuizen was "stood down" as the assistant referee in a Six Nations match in Dublin this year because he had attended an English practice to help the players with aspects of the laws.

But it was World Rugby that was at fault, not Van der Westhuizen. They had okayed England's request and then, with an apology, withdrew from the match because of a protest.

Referees are easy targets for ridicule for those who have never refereed. But this one borders on calumny.