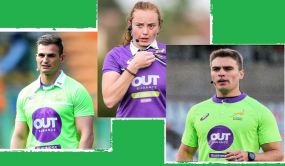 Three South African match officials have been named on the 2021 HSBC World Rugby Sevens Series panels for the men's and women's competitions, World Rugby has announced.

Specific tournaments allocations will be done at a later stage but Morné Ferreira and AJ Jacobs will form part of the action during the 2021 men's series to commence in September. Six tournaments are planned to take place in the final four months of the year in Canada, Singapore, Hong Kong, Dubai and Cape Town.

Meanwhile, Ashleigh Murray will be part of the women's circuit, which starts in Paris in October, followed by Hong Kong, Dubai and Cape Town.

Jacobs and Ferreira will follow in the footsteps of Craig Joubert, Rasta Rasivhenge, Ben Crouse, Jaco Kotze and Marius van der Westhuizen, while Murray will take over the flag from Aimee Barrett-Theron from recent years.

“This is good reward for them, delivering consistency in excellence over the last couple of seasons,” said Yantolo.

“It is also a good reminder for our internal structures that we are doing things right and a good motivation for all involved to keep delivering our best efforts.

“To be rated amongst the best referees on the international stage is a big feat, and this is a just reward for all their hard work and discipline. We want to congratulate them and wish them the best of luck, I am confident they will represent us well.”