Through the Years: Top 14 Referees 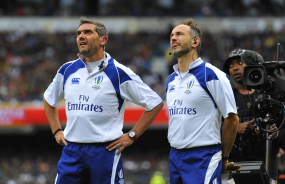 Jérôme Garcès, a full-time referee who will be 46 in October, is adding to his illustrious refereeing career with an appointment to his third Top 14 final this weekend - a grand occasion at Stade de Francis. It is a match first played in 1892.

The first referee in a final of the French Championat was Pierre de Coubertin, Baron Fredy, the founder of the modern Olympic Games who made it possible for rugby to be included amongst Olympic sports. He was the man who learnt all he could about sport and the spirit of sport from Rugby School. He was 29 when he refereed the final.

A lot of the early final referees were not Frenchmen.

Basil Wood was a Welshman with a business at Le Havre where he died in 1937.

Billy Williams was the man who found the famous cabbage patch that became Twickenham. He persuaded the RFU to buy the market garden, which is why Twickenham is sometimes referred to as Billy Williams's cabbage patch. The ten and a quarter acres cost £5 572 12s 6d. He later became the vice-president of the RFU and died in 1951 at the age of 91. He was a good cricketer playing for Middlesex and the MCC. He refereed the 1904 final and in 1905 he was the centre of controversy when he penalised the All Blacks 12 times in the first half against their "rover" for obstruction at scrums of the 2-3-2 formation.

Cyril Rutherford was born in Sussex and educated at Epsom College. He was twice in the team that won the French Championship, playing for Racing in 1900 and 1902. A businessman in the wool trade, he then became a referee, refereeing the 1905 final and the match between England and France in 1908. He actually played cricket for France. He was at one stage the secretary of the French Rugby Federation and received a Légion d'Honneur. He died in Paris in 1951.

Alan Henry Muhr, whose nickname was Le Sioux, was born in Philadelphia, USA. He served with the American troops in World War II as part of the Red Cross when he was 60, was captured and died in a concentration camp in 1944. He was a Commander of the Légion d'Honneur.

Frank Potter-Irwin, called Potter, was the celebrated referee of his time, refereeing eight Tests between 1909 and 1920, referred to often as the Prince of Referees. He refereed six Varsity matches and was invited to France to referee the final. He died in 1951 at the age of 77.

Jean de Witt was a Frenchman of Dutch descent, a Chevalier of the Légion d'Honneur.

In those amateur days refereeing was usually taken up after playing days. So some of the final referees played for France - Muhr, Mar Giacardy who played in eight finals, five times on the winning side, the last time in 1909, Henri Amand who played in nine finals, four times on the winning side for Stade Français and was 94 when he died in 1967, Charles Gondouin who was on the winning Racing side in two finals and was killed in an accident on Christmas Eve in 1947, Octave Lery, a vet who was awarded a Légion d'Honneur, Jacques Müntz, Chevalier of the Légion d'Honneur and Joseph Sourgens who was usually called Pierre,

Robert was a croupier in a casino in Biarritz. Gilbert Brutus, a Chevalier of the Légion d'Honneur, fought in World War I and was a member of the French resistance in World War II and tortured to death by the Nazis.

Charles Durand refereed his first final in 1950 and his last in 1968. He was for years the autocratic boss of French referees, dying in 2009 at the age of 88.

Albert Ferasse was for many years the president of the French Rugby Federation, one of rugby's most powerful men. He played for Agen in two finals and then refereed one. He was also the president of FIRA (now names Ruygby Europe) and the chairman of the IRB. He was a builder.

Bernard Marie was a politician, at one stage the Mayor of Biarritz.

André Cuny, a medical doctor, refereed just one Test. He was injured during the match and refused to leave the field.

René Hourquet was France's refereeing boss. He refereed a second final when Michael Lamoulie,, later an IRB assessor, was injured and he replaced him, the only time it happened in a final.

France's Final Referees Down The Years