Why Respect a Referee 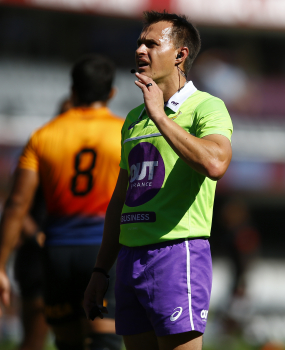 There are, believe it or not, good reasons to respect a rugby referee.

Here is an obvious one - a referee is a human being. The whole of society depends on the respect that people have for one another. Remove that respect and life becomes intolerable, even dangerous.

Part of that respect is encapsulated in laws which are there to protect us against seriously disrespectful people, and people who disrespect laws and rules and regulations are a menace, sometimes dangerously so. The man who disrespects the rulesof the road is dangerous. Speed limits and sobriety are not for him.

Italy is having a tough time and admit that the effects of the coronavirus are a disaster because people disrespected advice and regulations.

Nobody is forced to play rugby. It is something done through the exercise of free will. Presumably it is something the volunteer would like to do well. People who play usually want to play well, not in slipshod fashion. In other words there is respect for the activity, here a game.

In fact the laws of the game tell its players to show respect for the referee.

Law 9 deals with foul play. One of its provisions says: Players must respect the authority of the referee. They must not dispute the referee's decisions.
Sanction: Penalty

Arguing with the referee has never been a part of rugby's sporting spirit. It is also a futile exercise as the referee is "the sole judge of fact and law during a match", as Law 6 states. What the referee decides in a match is final. It does not mean that a referee is right even when he is wrong. It just means that that is the decision; now get on with the game.

In some games, it seems, querying the referee or umpire is tolerated if not permitted. Baseball and soccer spring readily to mind, much simpler games than rugby. Because rugby is such a complex game, it is all the more important that there be an immediate acceptance of a referee's decision.

That has been the rugby way, though recently there have been some cracks. Referees talk more and so players talk back more.

England has ever been the yardstick of sportsmanship, which makes it all the sadder to see England's captain disputing a referee's decision and to hear the coach of the England national team imply that a referee was cheating against his team - the infamous (and childish) suggestion that England were playing against 16 men.

In the context of rugby's tradition of respectful acceptance of a referee's decision and the need to preserve this aspect of sportsmanship. the response of England's Rugby Football Union to their coach's unveiled innuendo was sad and World Rugby's silent inaction woeful.

It is a long quote but an important one from the game's Playing Charter which precedes the details of the laws of the game.

"Rugby owes much of its appeal to the fact that it is played both to the letter and within the spirit of the laws. The responsibility for ensuring that this happens lies not with one individual - it involves coaches, captains, players and referees.

"It is through discipline, control and mutual respect that the spirit of the game flourishes and, in the context of a game as physically challenging as rugby, these are the qualities which forge the fellowship and sense of fair play so essential to the game’s ongoing success and survival.

"Old-fashioned traditions and virtues they may be, but they have stood the test of time and, at all levels at which the game is played, they remain as important to rugby’s future as they have been throughout its long and distinguished past. The principles of rugby are the fundamental elements upon which the game is based and they enable participants to immediately identify the game’s character and what makes it distinctive as a sport."