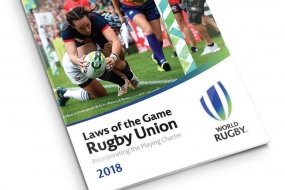 Vodacom Super Rugby and the Castle Lager Rugby Championship will this season adopt the Law Amendments that were announced by World Rugby in July 2017, prior to the start of the 2017/18 northern hemisphere season, SANZAAR confirmed on Thursday.

World Rugby approved the addition of these six law amendments to its programme of global law trials following positive trials in specific international competitions in 2017.

Domestically, the Laws Amendments were already used in the 2017 Currie Cup competition after SA Rugby successfully sought special permission from World Rugby, as a result of the Toyota Cheetahs and Southern Kings joining the Guinness PRO14 competition last year.

The amendments relate to the scrum (Law 20), tackle (Law 15) and ruck (Law 16) and are aimed at making the game simpler to play and referee as well as further promoting player welfare.

No signal from the referee. The scrum-half must throw the ball in straight but is allowed to align their shoulder on the middle line of the scrum, therefore allowing them to stand a shoulder width towards their own side of the middle line.

Once the ball touches the ground in the tunnel, any front-row player may use either foot to try to win possession of the ball. One player from the team who put the ball in must strike for the ball.

Rationale: To promote scrum stability, a fair contest for possession while also giving the advantage to the team throwing in (non-offending team).

What we will see: every team MUST hook the ball as part of the scrum-feed. If they don't, expect to see some Free Kicks against the feeding team.

The number eight shall be allowed to pick the ball from the feet of the second-rows.

What we will see: this will help teams under pressure when going backwards.

The tackler must get up before playing the ball and then can only play from their own side of the tackle “gate”.

Rationale: To make the tackle/ruck simpler for players and referees and more consistent with the rest of that law.

What we will see: cleaner ball at the back of the tackle and all players having to comply with the “gate” at the tackle.

A ruck commences when at least one player is on their feet and over the ball which is on the ground (tackled player, tackler). At this point, the offside lines are created. Players on their feet may use their hands to pick up the ball as long as this is immediate. As soon as an opposition player arrives, no hands can be used.

Rationale: To make the ruck simpler for players and referees.

What we will see: team in possession will send a support player in fast, in order to then clear the ball with an offside line now in operation (will force the defenders to get back onside quickly!). The first defender can still arrive and have an immediate go at the ball – so they can still win a quick turnover.

A player must not kick the ball out of a ruck. The player can only hook it in a backwards motion.

Rationale: To promote player welfare and to make it consistent with scrum law.

What we will see: the elimination of what is a very negative play to interfere with the attacking team’s ball at ruck time.

The law amendments will now join the scheduled global law trial programme, completing a total package of 11 aspects of law.

SANZAAR CEO, Andy Marinos, said: "The law amendments have helped create cleaner phases of play in northern hemisphere rugby matches, in terms of the ball at the back of the ruck.

"The scrum sequence will now be simple to implement, with the players taking charge of when they feed the ball into the scrum and the referee can focus simply on whether the scrum is stable.

"The pleasing thing for our Vodacom Super Rugby team coaches is that both the tackle and scrum amendments are largely what the southern hemisphere believed needed changing in order to help the flow and understanding of the game," added Marinos.