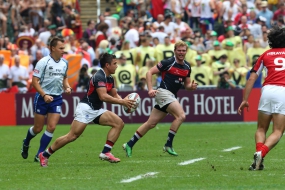 Marius is just back from refereeing two matches in Tblisi when the floods destroyed much of the city and opened the zoo for lethal wild animals to roam the streets.

This Saturday he is an assistant referee when the Springboks play the World XV and the week after that he will be in Windhoek to referee when Namibia play Russia.

Referees gad but they also have time to answer readers' questions.

Question: An attacking player kicks the ball into in-goal, and a defending player picks up the ball and is swamped by attackers so he cannot ground the ball. What would be the correct restart?

Good question as you don’t see that all that often! The outcome would be a scrum and the attacking team would feed the ball as per Law 22.10.

At a tackle our first priority is the tackler. He should immediately release the tackled player so that he can execute his options. Law 15.4 (a)

After that the tackled player must immediately execute his options. Of which putting the ball on the ground in any direction is one of them Law 15.5 (b, c, d)

If the referee feels that because of the actions of the tackler, the tackle player could not execute his options to score a try he must award a Penalty try. Law 10.2 (a)

Hope this answers your question.

Question: A team intend to form a ruck but no opposing players join. As ball is in front of last mans feet an opposing player joins. He does not have to bind but one of his team mates is in front off him. this team-mate tackles opponent as ball emerges. Should he be penalised?

You are keeping me nice and busy. ?

Ok, what would be applicable here is if a ruck forms or not as that would establish an offside line. Please see the definition of the ruck:

A ruck is a phase of play where one or more players from each team, who are on their feet, in physical contact, close around the ball on the ground. Open play has ended.

OK lets break this down. As I understand it…

The attacking teams intends to form a ruck. The defence initially does not join. The ball is not out yet. A defensive player then Joins and the ruck formed. An offside line is now established. Therefor the player who tackles an opponent is offside and should be penalized.

Please get back to me if I understood this wrong.

Question: Can you please show by illustration what a side entry at ruck time is and is a push in the face allowed at the cleanout?

Please see the illustration on page 105 of the World Rugby Law Book, This can be download from the World Rugby website. (http://laws.worldrugby.org/downloads/World_Rugby_Laws_2015_EN.pdf) Hopefully this will give you clarity.

With regards to your second question. I would suggest any contact with the head or face would be seen as foul play and should be dealt with.

Question: Greetings. Can a maul when started ever revert to a tackle? Earlier this season a coach (a primary school referee) was livid that I didn't penalise the defending team when after the maul has taken effect, the ball carrier went down on his knee(s). Law 17(5) is clear on how a maul successfully ends and 17(6) when unsuccessful.

On your question, the answer is NO a Maul cannot revert to a tackle.

Keeping players on their feet. Players in a maul must endeavor to stay on their feet. The ball carrier in a maul may go to ground providing the ball is available immediately and play continues.
Sanction: Penalty kick

Question: Stormer player No.4 broke his arm and was replaced by No.18 who played for 10 minutes but than the coach subbed him with No.22. Can you allow it?

Question: Hi. In the Stormers vs Brumbies game, around 66min, the referee went to the TMO. The decision was there was a high tackle on a Stormers player when the Stpormers were the defending team. This happened in the 5m area. Why was the penalty given by the referee on the 5m mark and not on the place of infringement?

Very Well spotted. The Penalty should have been at the place of the infringement. Laws 21.1 and 21.2 are applicable.

Question: If player A kicks the ball towards the touchline and player B tries to prevent the ball from going out and slap it back in but then falls out of touch, does this mean the ball is out because of where the player landed or is it play on?

If the ball crossed the plane of the touchline and the player lands outside the ball was kicked out directly.

Also please see the rest of the definitions for your info.

‘Kicked directly into touch’ means that the ball was kicked into touch without landing on the playing area, and without touching a player or the referee.

The line of touch is an imaginary line in the field of play at right angles to the touchline through the place where the ball is thrown in.

The ball is in touch when it is not being carried by a player and it touches the touchline or anything or anyone on or beyond the touchline.

If a player jumps and catches the ball, both feet must land in the playing area otherwise the ball is in touch or touch-in-goal.

In an 8 person scrum the formation must be 3-4-1, with the single player (normally the
Number 8) shoving on the 2 locks. The locks must pack with their heads on either side of
the hooker.
Exception: A team must have fewer than eight players in its scrum when the team cannot
field eight suitably trained players in its scrum due to either the team not fielding a
complete team, or a forward player being sent off or temporarily suspended for foul play, or
a forward player leaving the field because of injury.

Question: Thank you for taking the time to answer my question. I know this question has been asked before, but could you please explain the difference when a referee asks the TMO "Try or no Try?" and "Is there any reason I cannot award the try?. Also, how far back can the TMO go if a try has been scored, but the referee suspects an infringement?

It’s only a pleasure.

1st Question (Try no try) normally asked when the referee has no idea whether it is a try or not. The TMO must then see grounding and be sure that the player was not in touch. Question 2 (Any reason) The referee has seen the ball being grounded but suspects that there might have been a knock on or something wrong before he saw the grounding. So unless the TMO sees something wrong in the lead up the referee will award the try.

Question: Quick question about the penalty try in the Waratahs/Highlanders match. The law book talks about a try probably being scored but there is some debate about how you go about taking the infringing player out of the action. Do you remove the entire player to determine a probable try - so remove Potgeiter entirely from the situation, or do you just remove the illegal action - so you just remove the swinging arm? Potgeiter's body and legs were also a factor in preventing the try, so are they removed from the equation also? Thanks.

In the past some mention was made about removing the player who committed the foul play from of the equation completely. However that is not how the law is written.

It makes mention of the following:

There is no doubt in my mind that Potgieter's action constitutes foul play. So what you need to judge is, did that action prevent a probable try from being scored. If your answer is Yes then it’s a penalty try and a Yellow Card (as the law states you have to give a Yellow Card after a Penalty Try) . If No, then definitely a Penalty Kick and probable Yellow Card for the tackle.

Question: What is the sanction when the ball is thrown in at a line out in 15-man rugby and it is played before it reach the 5m line.

The sanction would be a Free kick on the 15m line against the team that prevented the ball travelling 5m. 19.10 (h)