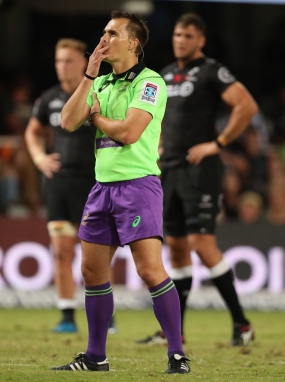 Marius van der Westhuizen, one of the best referees in the world, has had a gentler time of late but now Super Rugby is upon him and a year that goes from February to December, here, there and all over the world.

This includes a couple of dips into the Six Nations next month as the great competition comes to an end with England vs Ireland on St Patrick's Day.

Question: Why don’t referees enforce this law to have a fair contest at a tackle on the ground?

You are 100% correct - the tackle area should be a fair contest. We have set priorities to ensure that it happens.

Firstly. The tackler should move away, after that the tackled player should execute his options and after that, the arriving players get the attention of the referee. On paper, it sounds very easy to officiate that but the tackle is a dynamic phase and the immediate part of it will differ slightly from tackle to tackle.

As long as we as referees stick to the priorities I am confident that the public and all role players will be comfortable that the tackler phase is a fair contest for all involved.

Question: My question concerns the subs warming up behind the goal posts in the in-goal area charging forward to congratulate their players when a try is scored. This is getting out of hand in a few cases recently I see subs crowding around the try scorer when the referee has not yet given the try. On Saturday in a Euro championship game the subs, dressed in billowing waterproof jackets, were standing over the try-scorer and would have blotted out the TMO camera view, were a touchdown to have been queried.

Is it just overeager subs or more seriously blatant professionalism? Whatever this practice must be stopped.

You make an excellent observation and it is something that has bothered me for a very long time. I can assure you that it has been addressed in Super Rugby in 2018. The SANZAAR referee manager Lyndon Bray, as well as the competitions manager (Matthew Barlow), have asked us to be very strict with this as there is a concern of players getting injured and possible fights breaking out. I know World Rugby has also indicated that it is something we need to address in international matches.

Question: I read your site frequently and enjoy in particular the clips. From the clips, I have a question.

Can a maul become a tackle?

I ask this because you see a ball-carrier held by an opponent with both on their feet. A ball-carrier's team-mates - sometimes more than one - join in, making it a maul. The ball-carrier wriggles downwards till he gets a knee on the ground. The referee then shouts: 'Tackle. Release.'

How does a maul become a tackle?

You are 100% correct. A maul cannot turn into a tackle.

What we do try is to referee that part as accurately as possible and getting the balance right of Was the maul clearly formed vs Was the tackle in the process of being completed.

The last thing you want is for the defensive team to be penalised for collapsing the maul when they still thought it is the tackle phase, or penalising any of the teams for joining the maul incorrectly when they also thought it was a tackle.

My approach is: to referee it as a maul not when I can prove on the video frame by frame that the maul formed but rather to referee it when the spectator in the crowd or on TV would say that is clearly a maul.

For you part of the ball carrier-getting his knee on the ground. In law that constitutes a tackle. What we say as referees… Give the tackler a reasonable opportunity to release as he might not know that the player got a knee to the ground.

Question: Why did Glen [Jackson] penalise Ruan Botha when he won the line-out ball? His hand only touches the ball and not any player. That penalty prevent the Sharks from scoring

I take it you refer to the incident around minute 67 in the Lions vs Sharks game. In my view, Ruan Botha clearly grabs the arm of the player in the air before he knocks the ball out of the Lions’ players hands. When players are in the air, they are allowed to contest for possession but cannot play the man in the air in an attempt to get to the ball.

Unless I am referring to a different clip from you?